Flashback: Daniel Fortmann ’36, Team Player in the NFL and the OR 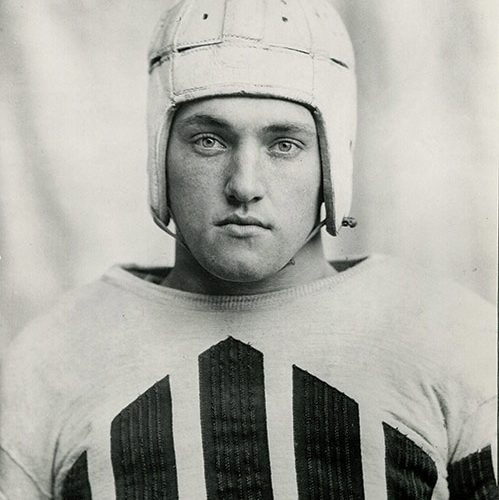 During the first-ever NFL Draft in 1936, Chicago Bears owner George Halas picked Daniel J. Fortmann ’36 as the team’s ninth and final draft pick. “Danny Fortmann. Now that name’s got a good sound to it,” Halas said of the offensive lineman.

Meanwhile, Fortmann was a senior all-star at Colgate under legendary Coach Andy Kerr, who once referred to him as the “best player [he] ever coached.” A leader off the field as well, Fortmann was a member of Konosioni, Phi Beta Kappa, Maroon Key, and Delta Upsilon. As he prepared for graduation, the chemistry major had a choice: the NFL or medical school. He chose both.

At age 19, Fortmann became the youngest NFL starter playing, and he enrolled at the University of Chicago’s medical school. He earned his MD in 1940, becoming the first person to do so while still playing pro football, according to the Los Angeles Times.

Named the “‘heart and soul’” of the Bears’ offense by the United Press, he won three NFL championship titles and ranked first or second for All-NFL honors during each season of his eight-year football career.

In 1944, Fortmann joined the Navy and was stationed on a hospital ship in the Pacific Ocean. He later became the team doctor for the Los Angeles Rams as well as a surgeon at St. Joseph Medical Center in Burbank, Calif. “The experiences you gain on the football field can be carried over in many other aspects of life,” he said, according to the Pro Football Hall of Fame, to which he was inducted in 1965. “Teamwork is something that’s important in both [of my] professions.”

Colgate inducted him into its Athletic Hall of Honor in 1979. Fortmann also stayed connected to the university as a member of the Alumni Corporation Board (1981–1985) and a Maroon Citation Award winner (1982).

In 1983, Fortmann was diagnosed with Alzheimer’s disease, which ultimately took his life at the age of 79 in 1995. He was survived by his brother, 2 sisters, 2 sons, and 5 grandchildren.