The Mystery Below the Galápagos 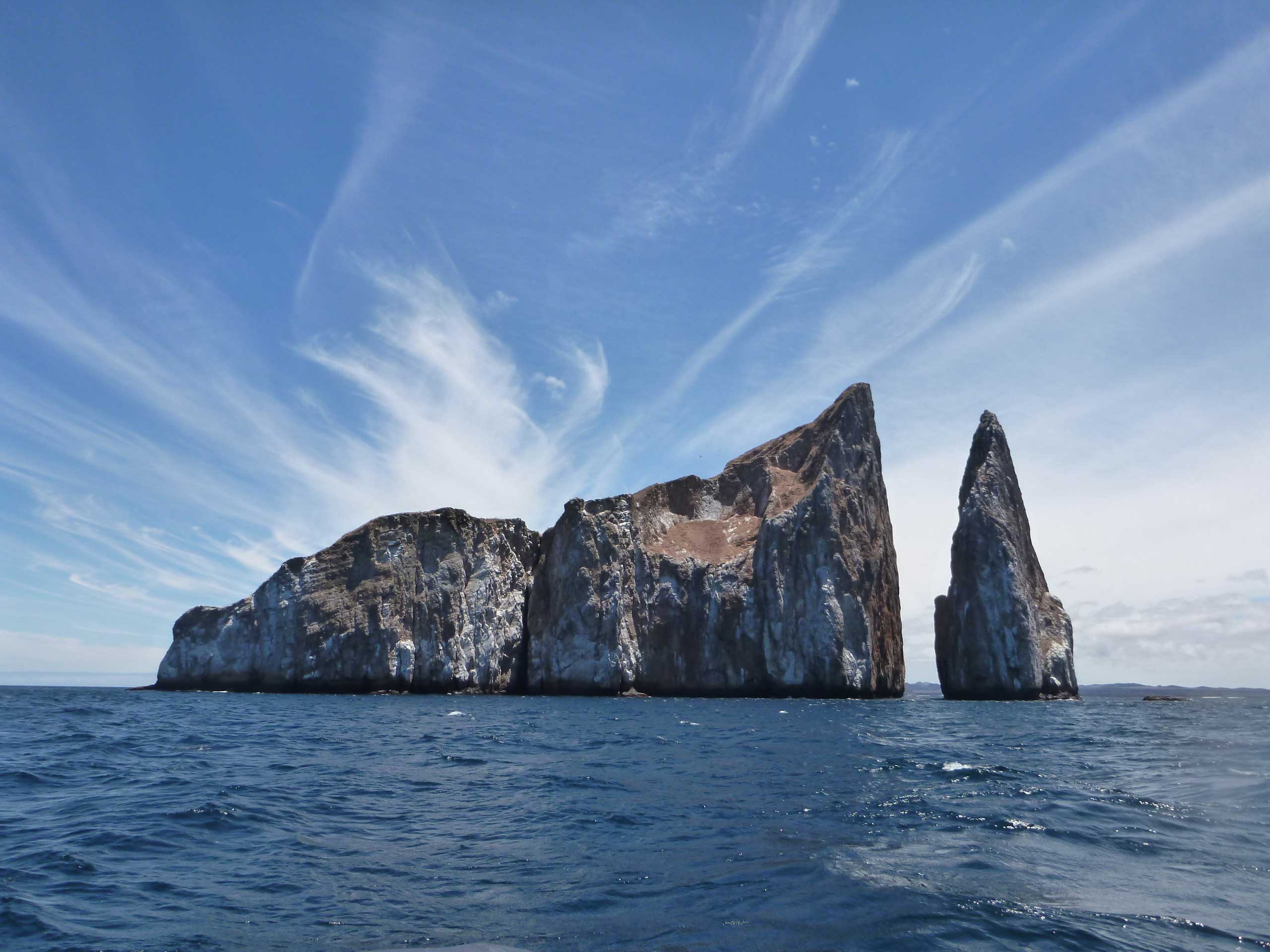 A visit to the Galápagos Islands, their unique flora and fauna the inspiration behind Darwin’s theory of evolution, is often the trip of a lifetime. For Karen Harpp, professor of geology and peace and conflict studies at Colgate, it’s also an opportunity to investigate a long-standing mystery.

Many island chains, from Hawaii to the Canary Islands to the Galápagos, are formed by volcanism. They’re gradually constructed, layer by layer, from lava. By the time that molten rock erupts from a volcano, however, it’s already gone on a long journey that started thousands of kilometers below the Earth’s surface. Volcanic rocks are therefore a window into the planet’s deep interior.

The go-to spot for those kinds of studies is Hawaii, says Harpp. “It’s accessible, it’s erupting a lot, it’s a nice place to go.” But a few decades ago, scientists realized that the 50th state had thrown them a curve ball: the Hawaiian chain of volcanoes is actually two chains of volcanoes, each with its own unique chemical fingerprint. Their volcanic rocks, rather than being made of the same stuff, are chemically distinct. Laboratory analyses reveal that they contain different ratios of lead, strontium, hafnium, and lutetium isotopes and can be separated into two groups.

That discovery revealed a lot about Hawaii’s mantle plume — the ribbon of hot, solid rock that moves upward through the Earth’s mantle, eventually producing the magma supplying the islands’ volcanoes. Rather than being homogeneous, it must be composed of two different types of rock, says Harpp. “They’re somehow remarkably making it to the surface without getting too mixed up.”

A few years ago, one of Harpp’s collaborators, Dominique Weis, proposed an explanation: Hawaii’s mantle plume resembles two strands of taffy, one side fed by the lower mantle and the other side fed by a blob of atypically hot rock within that lower mantle. The idea jives with the knowledge that Hawaii sits right above the edge of such a blob (scientists know of its existence thanks to the way in which seismic waves move through it). That proposal was a revolution in Earth science, says Harpp. “Really big, cool ideas don’t come along that often.”

Volcanoes in the Galápagos also show intriguing chemical differences, so Harpp and other researchers have long wondered whether something similar to the Hawaiian plume phenomenon was at play in the Galápagos.

The Galápagos is a special place for Harpp — she first went there in 1990 as a graduate student and has returned pretty much every year since. “Even as we think we’ve resolved one scientific question, the archipelago throws us another one, which keeps it really exciting as a place to work,” says Harpp.

Over time, Harpp has amassed a sizeable collection of volcanic rocks from the Galápagos. She and her colleagues collected them through research projects supported by the Galápagos National Park and the Charles Darwin Research Station. The rocks might not be much to look at — most are homely brown or grey and no larger than a fist — but they tell many stories.

Harpp and Weis recently analyzed 83 of those volcanic rocks. They chipped off small chunks, ground them up, and chemically analyzed the powder in the laboratory. The scientists compared the rocks’ isotopic compositions with those of volcanic rocks from Hawaii.

They found that some of the rocks from both locales shared the same chemistry. Those rocks, the researchers surmised, must have been formed from magma from a common source, most likely the normal lower mantle. But other rocks from the Galápagos didn’t match up with either of the two groups of Hawaiian rocks. Perhaps they formed from magma sourced from the same blob of hotter material that also nourishes one chain of Hawaii’s volcanoes, but a different side, the researchers suggested.

That makes sense, says Harpp, because Hawaii lies above the northern edge of the blob, and the Galápagos lies above its eastern edge. Previous observations have indicated that this blob might be composed of ancient slabs of the Earth’s crust that sunk in subduction zones, so it’s logical that different sides of the blob would be chemically distinct.

It was one of the rare unifying moments in research, says Harpp, to realize that the volcanoes of both Hawaii and the Galápagos can be described by mantle plumes with the same two-stranded structure. “One concept actually manages to explain a range of apparently disparate observations.”

Harpp isn’t finished with the Galápagos. In addition to ongoing research projects, she’s also launching an interactive virtual field trip to the islands for elementary-aged school children. Harpp is mentoring Colgate undergraduate students as they design lesson plans focused on scientific mysteries about the Galápagos. The learning experience will be immersive, thanks to the field trip’s many images, maps, and videos of the islands, says Harpp.

Sharing the science of the Galápagos is one way to help people learn to appreciate, conserve, and protect this special place for future generations, Harpp says. The goal is to “share this fascinating place with more people.”