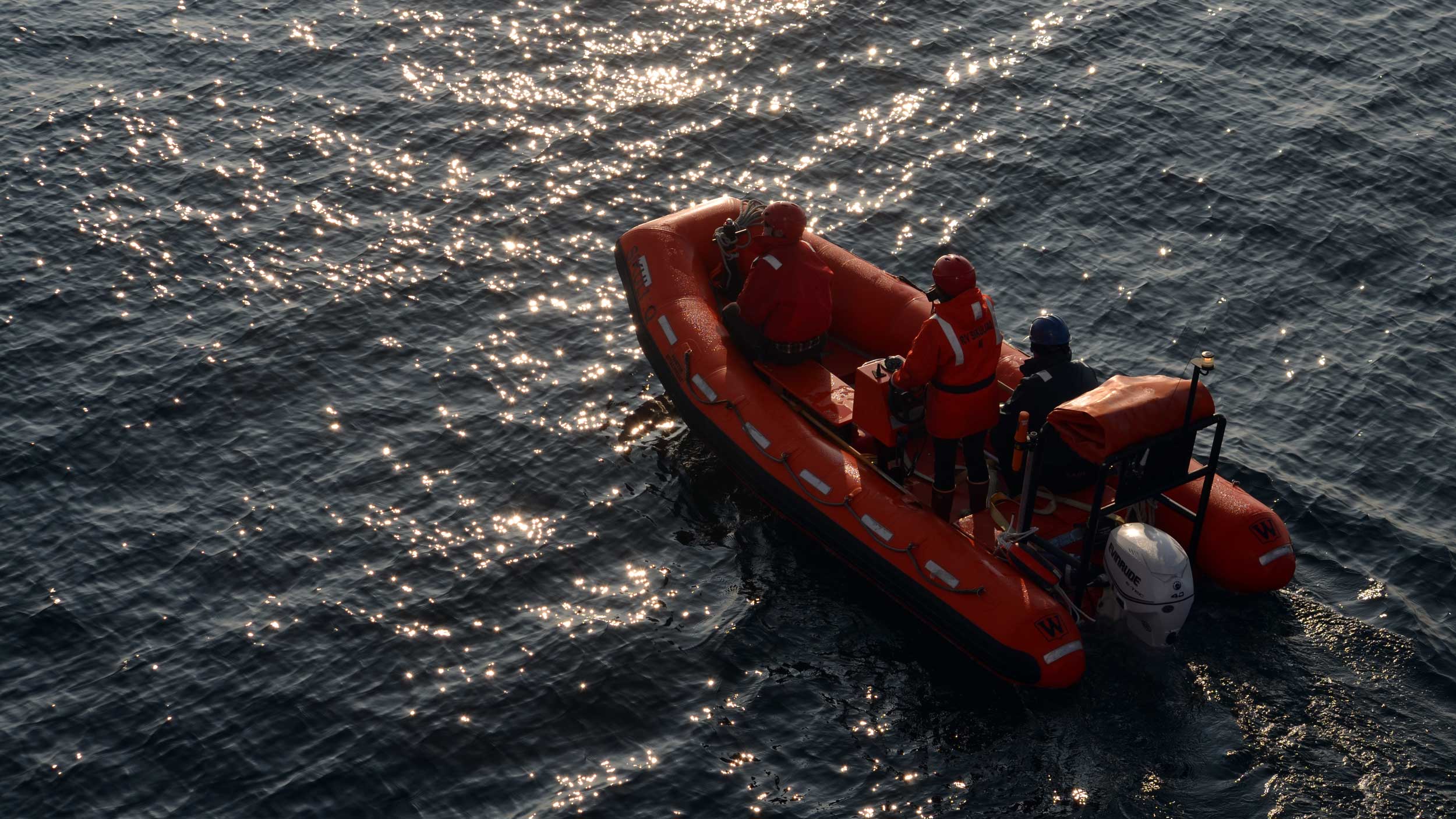 In the cold seas off southwest Alaska, waves roll and crash against rocky shores, thundering in ceaseless motion against the stone. But ocean waves are nothing compared to what lies beneath. Hundreds of kilometers below the waters and thick sediments of the great Aleutian trench, great plates of continental crust rasp against each other, breeding powerful earthquakes. The region is home to the largest concentration of earthquakes in the United States, and among the largest in the world. It’s a rugged place of dangerous seas and volcanic mountains. And it’s where assistant professor Aubreya Adams conducts a lot of her research.

Adams is a seismologist, a scientist who studies the waves created by earthquakes — waves that travel through the rock itself. She’s also a researcher with the Alaska Amphibious Community Seismic Experiment (AACSE), a collection of geophysicists exploring the tectonically active area. August 10–29, she sailed aboard the research vessel Sikuliaq as co-chief scientist, co-leading a team of 20 people in gathering data and assisting in the tricky task of recovering scientific instruments.

With grant support from the National Science Foundation, Adams and the AACSE team are gathering data about the Aleutian subduction zone, where the great Pacific continental plate dives beneath lighter North American one. There are practical reasons to keep an eye on the area, Adams says: the second largest earthquake in recorded history, the Good Friday Earthquake of 1964, occurred along the Aleutian trench. Measuring a staggering 9.2 magnitude, it rippled out across south central Alaska, fissuring rock, liquifying soil, shattering buildings, and killing 131 people.

But the region is of scientific interest, too. One part of the study region produced the Good Friday Earthquake; another area seems not to have had a single large earthquake for thousands of years. “We have — within a hundred kilometers of each other — something capable of generating huge and extremely damaging earthquakes and tsunamis, right next to something that doesn’t seem to do that,” Adams says. “If we want to understand tectonics and hazards, we want to understand what can cause that kind of variability.”

One of the primary tools to study the movements in the earth’s crust is the seismometer, a passive sensor that measures nearby motion in the earth, whether passing footsteps or an earthquake. During the past three years, the AACSE has deployed an array of 105 seismometers, 30 of which are placed on dry land, and 75 of which go on the ocean bottom. Last summer, AACSE research teams sailed out on a retrieval mission.

While the Sikuliaq was a comfortable place to spend a few weeks — the beds were comfortable, the lab was large, and the food was excellent — sailing the northern seas isn’t always a picnic, according to Adams. The cruise lucked into largely calm conditions, but the waters could be temperamental: smooth as glass one day, a running gale and 12-foot waves the next. “You could be in your bed and getting rolled around with the ship,” Adams says. “The beds had to have guard rails, but we were pretty lucky. The conditions as a whole were calm.”

A good thing, too, because retrieving ocean seismometers is no easy task. The instruments themselves are constructed from buoyant material, which are attached to heavy metal plates to keep them settled on the ocean floor. After being dropped, they’re left to passively record for months before another voyage comes back to retrieve them. In theory, recovery is simple: the research teams remotely trigger battery-powered “burn wires” on the metal plates to release the seismometers, allowing them to simply float up to the surface.

But a lot can happen in the 15 months between placing the seismometers and retrieving them. Locating the seismometer again isn’t always easy: unlike land-based instruments, GPS signals don’t work in deep water. In shallower waters, strong currents and dredging nets can pull a measuring station away. And the crushing cold and pressure at deep-water sites — some as deep as 5 kilometers, or more than three miles — is very hard on batteries, and so the acoustic command to release the seismometer sometimes falls on deaf ears.

When that happens — as it did four times during Adams’ trip — the team sometimes runs JASON, a remotely operated vehicle, down to retrieve them. (This doesn’t always work: in one case they couldn’t find any sign of the station, and they still aren’t sure what happened to it.) Even when all goes well, it can take hours for the seismometer to return to the surface. Then, Adams says, you have to wrestle it aboard via grappling hooks and winches, which is no small feat: measuring stations range in size from a few hundred pounds to more than 1,400 pounds.

“They’re absolutely disgusting when they come up. They’re covered in slime,” Adams says. After months spent sitting in the soft, silty ooze at the bottom of the sea, they arise bearing the scars of their time in the dark: sulphur, caked mud, and in one case, little stalactites of red rust. Deep sea life often came up with the instruments as well: crabs and lobsters, weird organic globules that may have been snail eggs, and a crinoid, a deep sea animal resembling a feather-petaled flower that belongs to a mostly vanished lineage. It was enough to make the team wish for a biologist, Adams says.

What comes next? While the seismic data collected on this and other AACSE trips is freely available to the entire seismology community, Adams is in the process of writing a proposal to begin analyzing the data they’ve collected. The goal is to help understand why one of the fiercest fault lines on the planet behaves the way it does — and to keep watch on the subterranean waves it sends spilling out against the shore.

As Adams wrote with her co-authors in Earth and Space Science News, “The 15-month deployment of AACSE stations will represent one of the longest large-scale multi-instrument amphibious seismic deployments to date. Collectively, this experiment promises to record abundant seismic activity, which should provide new insight into earthquake source properties and serve as a source for local geophysical imaging.”