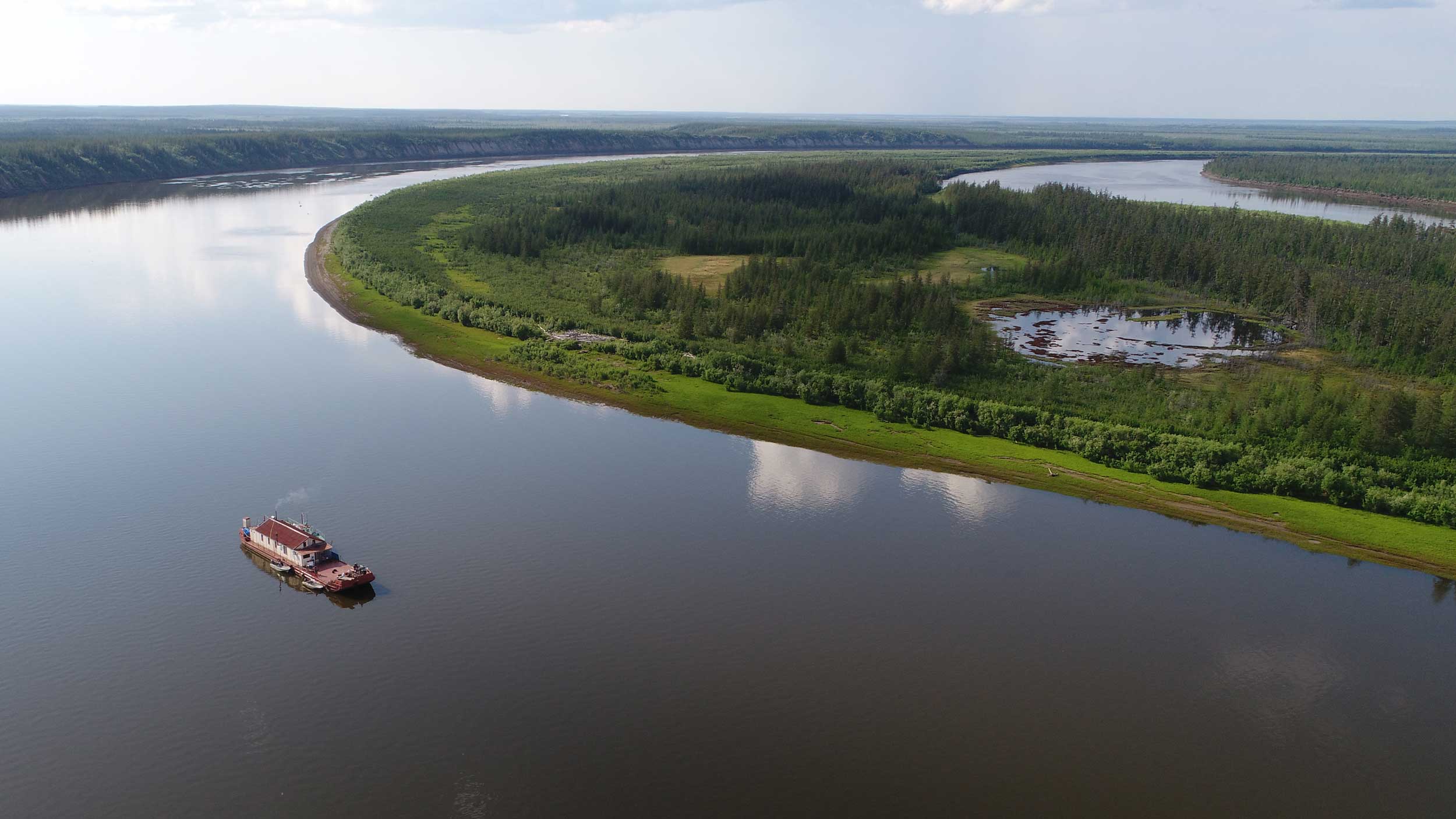 Using satellite imagery and field observation, a geographer studies changes in one of the world’s most important ecosystems.

Larix cajanderi — also known as the Cajander larch — is nothing much to behold. With its scrawny trunk and scraggly branches, it resembles an anemic Christmas tree. But to Mike Loranty, it couldn’t be more interesting. So interesting, in fact, that 10 times in the past decade, the associate professor of geography has flown 4,500 miles — from Hamilton, N.Y., to a remote research station in the Siberian settlement of Cherskiy, 200 miles above the Arctic Circle and 60 miles from the Arctic Ocean — to observe it firsthand.

Loranty’s most recent trips are part of a four-year, $1.6 million National Science Foundation Arctic Systems Science Program grant ($397,377 of which goes to Colgate) that he and several collaborators received in 2017. As an expert in remote sensing and GIS, Loranty, along with postdoctoral research fellow Anna Talucci, is responsible for mapping forests and fires. The goal of the study is to determine how changes in wildfire regime — the frequency and intensity of fire over a period of time — affect Siberian larch forests. (Although fire records for Siberia don’t exist, in North American boreal forests, the number of large fires and the total area burned doubled in the second half of the 20th century.) Because larch trees account for a substantial portion of the carbon contained in some boreal forests, how those forests recover and how their composition changes have profound implications for the climate.

This work builds on a 2012–2017 study in which Loranty and others explored the connection between fire severity and how well seeds germinate once the flames have died. In Siberia, larch trees grow relatively far apart, so wildfires travel mostly along the ground. The top, mossy layer of earth is often too dry for larch seeds to find a foothold, but once that burns away, a clayey, silty layer underneath, called mineral soil, offers much more seed-friendly conditions. Loranty says the study bore out their hypothesis that “the more severely a fire burns, the better it is for seed germination and survival.”

It’s in this immense wilderness that Loranty witnesses what interests him most of all: the interactions among plants, ecosystems, and the atmosphere. “Plants and ecosystems can take carbon out of the atmosphere or they can put carbon in,” he says. “They can put water into the atmosphere that will go fall somewhere else. And they can affect how much light gets reflected away from the earth, or how much gets absorbed.” Understanding these connections — how changes in one feed back to the other and vice versa — has arguably never been more important.

Those interactions are especially salient in the Arctic, which is warming twice as fast as the rest of the planet; during the winters of 2016 and 2018, surface temperatures in the central Arctic were almost 43°F above the 1981–2010 average. This warming trend has caused Siberian forests to burn more often; fires, projected to increase for the rest of the century, release stored carbon into the atmosphere, which then becomes warmer and drier, in turn causing more fires, which release more carbon — all the while reducing the earth’s carbon storage capacity. At the same time, as the new study in part seeks to show, if grasses and shrubs grow where larch trees fail to replenish themselves, they’ll be covered by snow most of the year, increasing the amount of solar energy reflected away from the earth and, potentially, resulting in cooler air. How these effects offset each other remains to be seen.

As permafrost thaws, the organic material it contains begins to decompose, a process that releases CO2 and, worse, methane, into the air.

The unnerving oxymoron “permafrost thaw” indicates an even more vicious cycle. Permafrost is the layer of frozen soil — sometimes a few feet, sometime miles deep — that underlies tens of millions of square kilometers, including the vast area Loranty studies. It also holds, ominously, twice as much carbon as the atmosphere. Because plants and animals don’t completely decompose in cold climates, more than a hundred thousand years’ worth of organic matter is entombed in permafrost “like meat in a freezer,” says Loranty. As permafrost thaws, the organic material it contains begins to decompose, a process that releases CO2 and, worse, methane, into the air.

By quantifying these and other interactions — between vegetation and snow cover, plants and soil, fires and permafrost thaw — the geographer and his colleagues hope to understand and predict how ecosystem changes in the Far North will affect the earth’s climate overall. “I think I have an obligation to leverage my understanding of the climate to help the general public grasp the severity of the problem,” says Loranty, who recently contributed to a chapter on the effects of snow cover on climate in a special report of the United Nations’ Intergovernmental Panel on Climate Change. He is also co-author on a forthcoming paper in Nature Climate Change on wintertime carbon emissions in the Arctic. “Whether you’re talking about global temperature or indicators like permafrost, changes are happening quite rapidly,” he says, “which I think is quite alarming.”

Most of the year, Loranty is able to analyze the high-resolution images of Siberia from private and publicly owned satellites while sitting at his computer in the Robert H.N. Ho Science Center. But come July, when the small window of the Arctic summer opens and the mosquitoes are at their thickest, he packs up his drones, ground sensors, and ice core drill and, with colleagues and students, embarks on the field trip that will carry them across eight of Russia’s eleven time zones to Cherskiy. There, at the Northeast Science Station, a barge outfitted with a bunkhouse awaits. A local captain will tow the researchers hundreds of miles up a tributary of the mile-wide Kolyma River. Each morning after breakfast, the team will board smaller boats and motor four hours farther into the field to spend entire days (and some sunlit nights) gathering soil and ice samples, measuring larch trees, and checking camera traps.

“I wouldn’t feel comfortable doing analysis of satellite images and saying things about the ecology of these places without having been there,” Loranty says. “When I’m working collaboratively, I like to know my colleagues’ data firsthand. So I pick up and go and help them collect it.”

But there’s something about this silent landscape itself, which he describes as “variations on a theme of green,” that draws him back across 4,500 miles, summer after summer. The “mosquito aspect” aside, Loranty says, “the Arctic is a very charismatic place.”