Finding Inspiration in the Lowly Barnacle 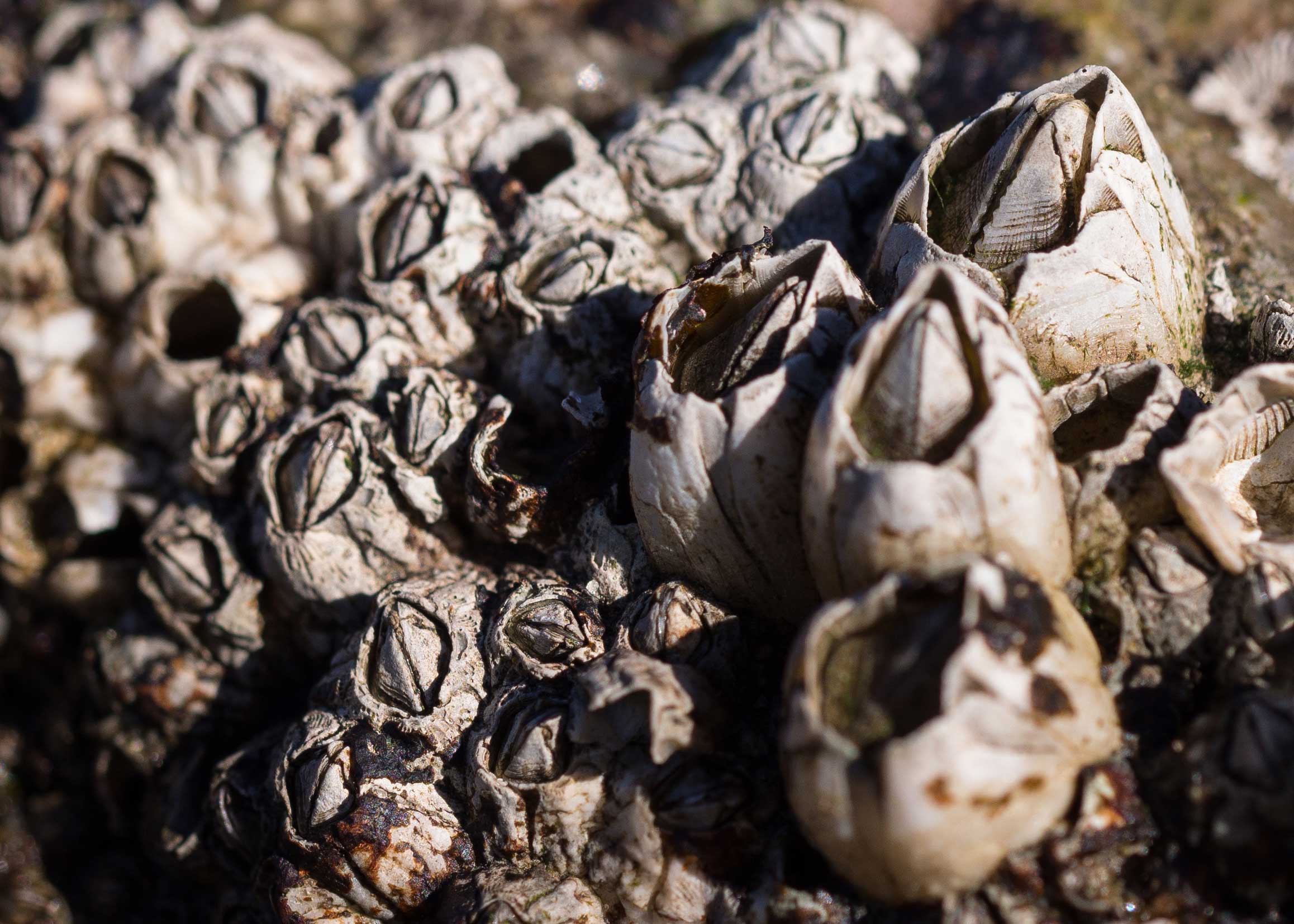 For most of us, barnacles are barely noticed — just some shells that blend into the rocks at the beach. For ship owners, they are a nuisance, adhering to ships’ hulls and creating drag that slows them down through the water. For Associate Professor of Physics Rebecca Metzler, however, they are a treasure — organisms unique in their ability to adapt to almost any marine environment.

“Their exoskeleton has not changed significantly for millions of years,” says Metzler. “Now they can be found everywhere — anywhere you can find ocean.” In fact, barnacles are amazingly skilled in sticking themselves to nearly any surface. “You see them on metal pipes, boats, wooden piers, and soft organisms like whales,” Metzler says. “The adhesive they produce even hardens underwater.”

Humans would love to replicate that kind of versatility in order to create glues that could stick fast in almost any situation. Yet, despite being around for millions of years, barnacles are still an enigma to science. “As far as we know, their adhesive is made up of proteins, but only a few of those proteins have been identified,” Metzler says. “They are hard to separate from the mixture the organism creates.”

There are so many of these marine organisms that make these wonderful materials. There is so much we can learn from them to build better materials ourselves.

Metzler has been working to demystify these organisms, to find out just how they create such hard shells and sticky feet. The answers to those questions could offer a wide range of applications in material and medical science, allowing us to create powerful adhesives compatible with the body. Metzler got her start studying pre-med as an undergrad at Denison College, but switched to theoretical astrophysics. Wanting to do something a bit more based in life sciences, she discovered abalone shells while a grad student at the University of Wisconsin-Madison, thrilling at the iridescent mother of pearl the organisms create. “It opened up a whole world for me,” she says. “There are so many of these marine organisms that make these wonderful materials. There is so much we can learn from them to build better materials ourselves.”

Since then, she has studied mussels, oysters, and other mollusks, but nothing quite matches the barnacles for sheer stick-to-it-iveness. Not only do they stick to almost anything, but they also actually change the chemical composition of their adhesives to fit the environment. “They are very intelligent,” Metzler says. “They make different adhesives depending on what they are sticking to.” Their shells, too, are impressive in their strength. Unlike abalone and other species, which stack minerals in an orderly fashion like a brick wall, barnacles create random structures, which prove difficult to break.

Scientists have speculated that these adhesives could be used in dentistry, where the calcium phosphate of teeth is similar to the calcium carbonate of barnacle shells.

Partnering with Gary Dickinson of the College of New Jersey and other colleagues, Metzler tested the limits of both shells and adhesives by subjecting barnacles to a range of different environments, including low pH (acidic) water, to see how it affected their ability to bond. While many organisms find it difficult to mineralize in acidic environments, the barnacles were surprisingly unaffected. “We expected it would result in less massive shells, but barnacles are pretty robust, and pH doesn’t seem to bother them all that much,” says Metzler, who published the findings last October with other scientists in the journal Frontiers in Marine Science.

More recently, Metzler has been working alongside undergrads at Colgate to study juvenile barnacles, a scant 100 microns wide, which swim around before undergoing metamorphosis and attaching themselves to a substrate where they will spend their adult lives. Metzler and her students have been examining how the development of their shells and adhesives changes with different conditions of pH, temperature, and salinity. “We are hoping that tracking this process can tell us something about how these things are formed,” she says. In addition to preventing barnacle adhesion, however, learning these crustacean’s secrets could also teach us how to emulate them. Scientists have speculated that these adhesives could be used in dentistry, where the calcium phosphate of teeth is similar to the calcium carbonate of barnacle shells. It could also apply very naturally to bone repair in place of metal pins or plates currently in use. “Cells that make bones don’t particularly like metal,” Metzler says, “whereas the adhesive and minerals are more similar to bone structure.”

Considering applications like these brings Metzler full circle, marrying her early interests in medicine and helping people with her current fascination with these mineralized materials. “Ultimately, my goal is to understand how these organisms and materials function,” she says, “but I also want to get that info out to where people can use this information to create new materials.”