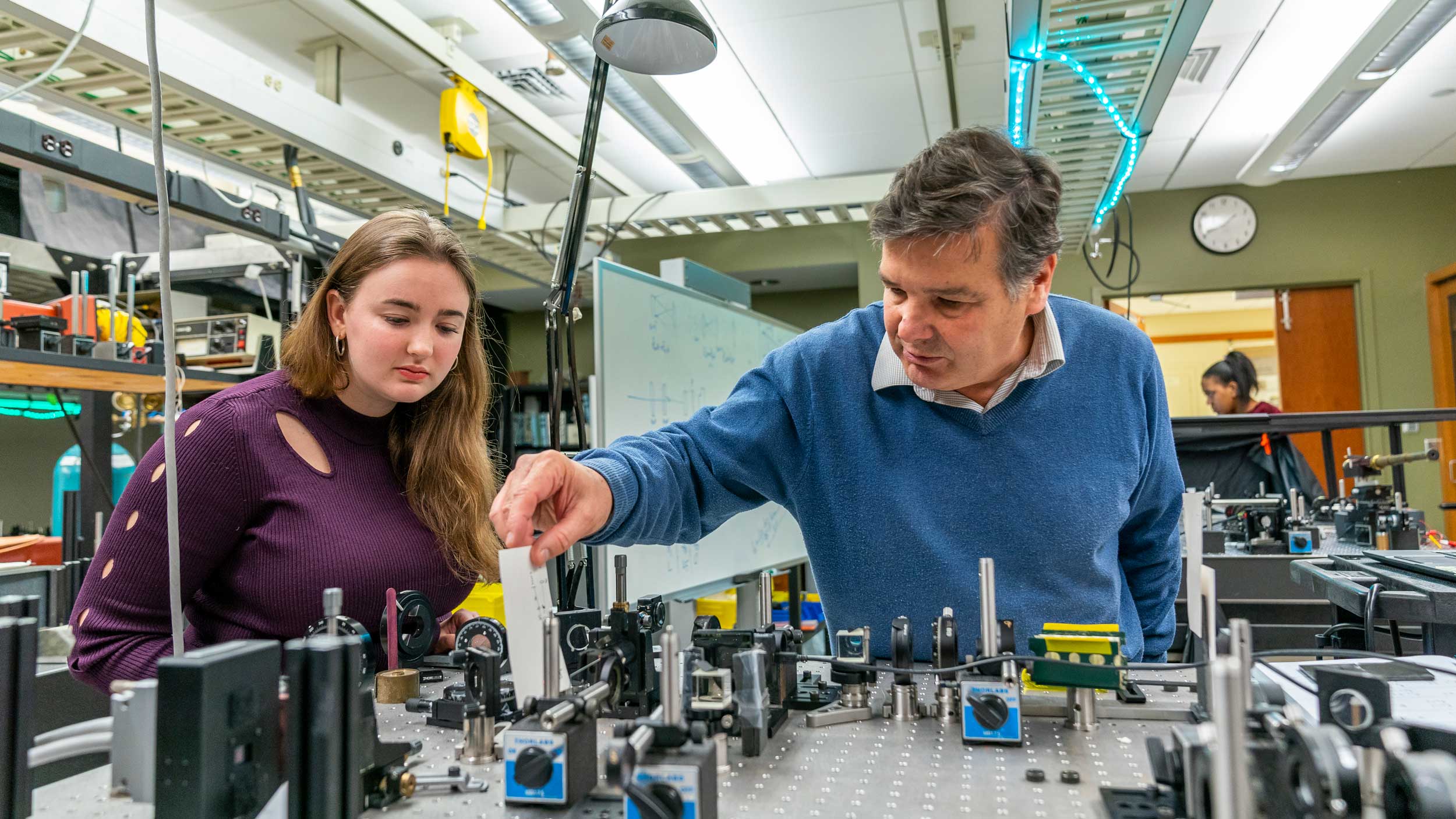 Albert Einstein famously dismissed it as “spooky action at a distance”— the idea, predicted by quantum mechanics, that pairs of tiny particles separated by space could somehow experience a connection. Called “quantum entanglement,” the theory proposed that once particles are entangled, interacting with one particle would affect the other, even billions of miles away. While that might seem like magic or science fiction, physicists have more recently confirmed that the phenomenon is real.

“There is some kind of invisible connection, and we don’t know what it is,” says Enrique “Kiko” Galvez, Charles A. Dana Professor of physics and astronomy at Colgate, “but that property has been measured and confirmed, and there is no question that it exists.” Galvez works with photons, tiny packages of electromagnetic energy that make up light on a fundamental level. “They are not really particles because they are not solid,” he says. “They are more like packets of light.” With specialized equipment, scientists can entangle photons and measure them in the lab.

These entangled photons are far from a mere scientific curiosity, however. In a set of recent experiments conducted with City College physics professor Robert Alfano and biomedical physicist Lingyan Shi, Galvez has found a surprising application in medicine. Using these entangled photons to scan brain tissue, he found that they can identify the difference between healthy and unhealthy samples. “Think of entangled photons as a source of light, which gives different information from conventional sources,” Galvez says. “By sending this light source through brain tissues, we can find a difference between tissues of brains that have Alzheimer’s, relative to tissues that are normal.”

Galvez has been experimenting with these entangled photons for two decades, setting up an apparatus a teaching lab to demonstrate their properties to students. It consists of a metal table with a medium-powered laser that shoots a concentrated beam of light through specialized optical components to create entangled photons, which are then measured by electronic devices called single-photon detectors. Depending on how the experiment is set up, Galvez and his students can create and measure different degrees of entanglement. “You can quantify how entangled the photons are, from very entangled to completely unentangled,” Galvez says.

Since entanglement was confirmed in the 1980s, scientists have been using pairs of entangled photons to try and create “quantum computers,” capable of a vast increase in computing power. By utilizing the unique property of entanglement, these computers could theoretically do simultaneous complex computations, arriving at a solution infinitely more quickly than computers relying on simple bits and bytes. “When you purchase something online, your credit card information is encrypted, so it would take you years to decrypt it, even with a supercomputer,” Galvez says. “A quantum computer would be able to decrypt these secret messages very fast.” On the other end, physicists and computer scientists have been looking at a principle called quantum key distribution to be able to send encrypted messages in a way that eavesdropping, if present, would be discovered.

Historically, Galvez’s lab has explored more fundamental qualities of entangled photons, rather than using them for a specific application. While on sabbatical four years ago, however, Galvez visited his colleague Alfano at City College in New York. In his lab, Alfano studied brain tissue and methods of detecting the neurodegenerative disease Alzheimer’s. The two got to talking, and started to wonder together what would happen if they shot entangled photons through a tissue sample. “One thing led to another, and we agreed to bring my apparatus from Colgate to test,” Galvez says. “It was a complete wild shot.”

Ordinarily, a beam of light shot through a turbid medium such as body tissue would scatter in many directions. “You have so many long molecules of protein and DNA and whatnot inside, we thought it would destroy the entanglement,” Galvez says. Surprisingly, however, the photon entanglement was preserved, so it could be measured even after shooting the beam through the tissue. “It almost doesn’t even depend on the thickness of the tissue—the entanglement survives.”

They began wondering, however, if different types of tissues would make subtle changes in the degree of entanglement of the photons. After Galvez returned to Colgate, and with fresh funding from the Picker Interdisciplinary Institute of Colgate University, Alfano and Shi began sending him different samples for him and his students to test. After several years of ups and downs in the experiment, Galvez says, we began getting consistent results. Last year, Faith Williams ’19 was able to show in her honors thesis that entanglement degrades slightly more in healthy tissue than in tissue with Alzheimer’s. “It was a small difference, but it was consistent,” Galvez says.

During the summer, Galvez and his students received more samples that were much thicker than the ones tested previously. When summer researcher Baibhav Sharma ’21 subjected them to the same test, he found that the differences on the thicker tissues were magnified. “We found a huge difference,” Galvez says. “That is very exciting.” Galvez speculates that the discrepancy may have to do with a compound known as amyloid beta-protein that has been shown to build up in brain tissue of those afflicted with Alzheimer’s.

Galvez and collaborators are now working on developing further confirmation in the data before publication. At the same time, Galvez is working with another student, Lindsey Wiley ’20, to develop a new way to take images of the tissues using the degree of entanglement as the “color.”

Of course, in a medical context, it would be difficult to test brain tissue of living patients. Ultimately, however, Galvez speculates that the technique might be adapted for use in the clinic. For example, amyloid beta-proteins have also been found in the retinas of patients afflicted with Alzheimer’s. A variation of the process using reflection might be able to measure a difference in entanglement. “You could, in principle, do measurements in the retina, which could be done in vivo,” Galvez says. “If successful, this method could become an effective way to diagnose Alzheimer’s using a new modern technology that has never been tried before.”