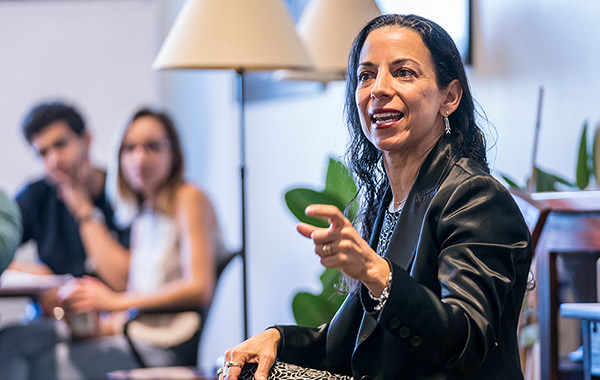 At an especially critical time in Puerto Rico after Hurricane Maria devastated the island, Teresa Delgado ’88 came to Colgate in the fall with a message of optimism for her people. “Our suffering is not our lot in life — it is but a moment to claim our resistance to our suffering,” says Delgado, an associate professor of religious studies at Iona College. “In God’s eyes, we are never a lost cause; there is always hope.”

With her recent book, A Puerto Rican Decolonial Theology: Prophesy Freedom (Palgrave Macmillan), Delgado aims to create an understanding of Puerto Rican identity through their own lens as well as a theological perspective. “No matter what the wider society has claimed our place to be — as colonial subjects, as second-class citizens — we are anything but in the eyes of God,” she says. “Our identity is intentional and it is good.”

By visiting Colgate to discuss her book, Delgado came full circle. For she’d had an epiphany when she submitted her book manuscript to the publisher: “I thought back on the entire journey that my academic life, my intellectual passions have taken. And I realized that my Latin American women’s literature class thirty years ago opened up these worlds that I had not been exposed to before.” The stories she read in that class “called to me,” Delgado says. She’d been in search of a Puerto Rican perspective of liberation and found that “in many ways, the colonial condition had suppressed voices that were calling out for freedom, but it hadn’t suppressed the creative writers who, through the process of their storytelling, were pointing in the direction of self-determination and giving voice to the deepest parts of the soul longing to be free.”

Reflecting on her process, Delgado knew, after all these years, she had to contact her former professor, Lourdes Rojas-Paiewonsky, Charles A. Dana Professor of romance languages and literatures and Africana and Latin American studies. “I didn’t expect that she would have remembered me, but I wanted her to know what had transpired and that this book, in many ways, began in her classroom thirty years ago,” Delgado says. “I wanted to say ‘thank you.’”

In fact, Rojas-Paiewonsky did remember Delgado as an A student (who also was the 1819 Award and Adam Clayton Powell Jr. Award winner). As a result, Delgado coordinated a campus visit with her trip to Hamilton for a Colgate Board of Trustees meeting.

On Oct. 5, Delgado spoke in Rojas-Paiewonsky’s Spanish literature class and, later that day, delivered a talk about her book. The goal of the larger lecture was to “provoke a conversation about who gets to tell a people’s story and what happens when those who are situated in the subterraneous places in our society claim to tell their story,” Delgado says. “So in the context of Puerto Rico, in the current moment we’re in, it has highlighted the ways that a story has been told about us, and that is not our truth. Now is a particular moment to tell a different story.”

In her own role as a professor, Delgado is influencing the next generation. Because, she says, there aren’t any works that bring together a theological voice and the Puerto Rican story, Delgado was partly compelled to write this book so that it could serve as a building block for her students. “So many students I’ve worked with over the years have told me, ‘Professora, you need to write this. We need this for our own work,’” she says. “So, in some ways, it’s also for them.”