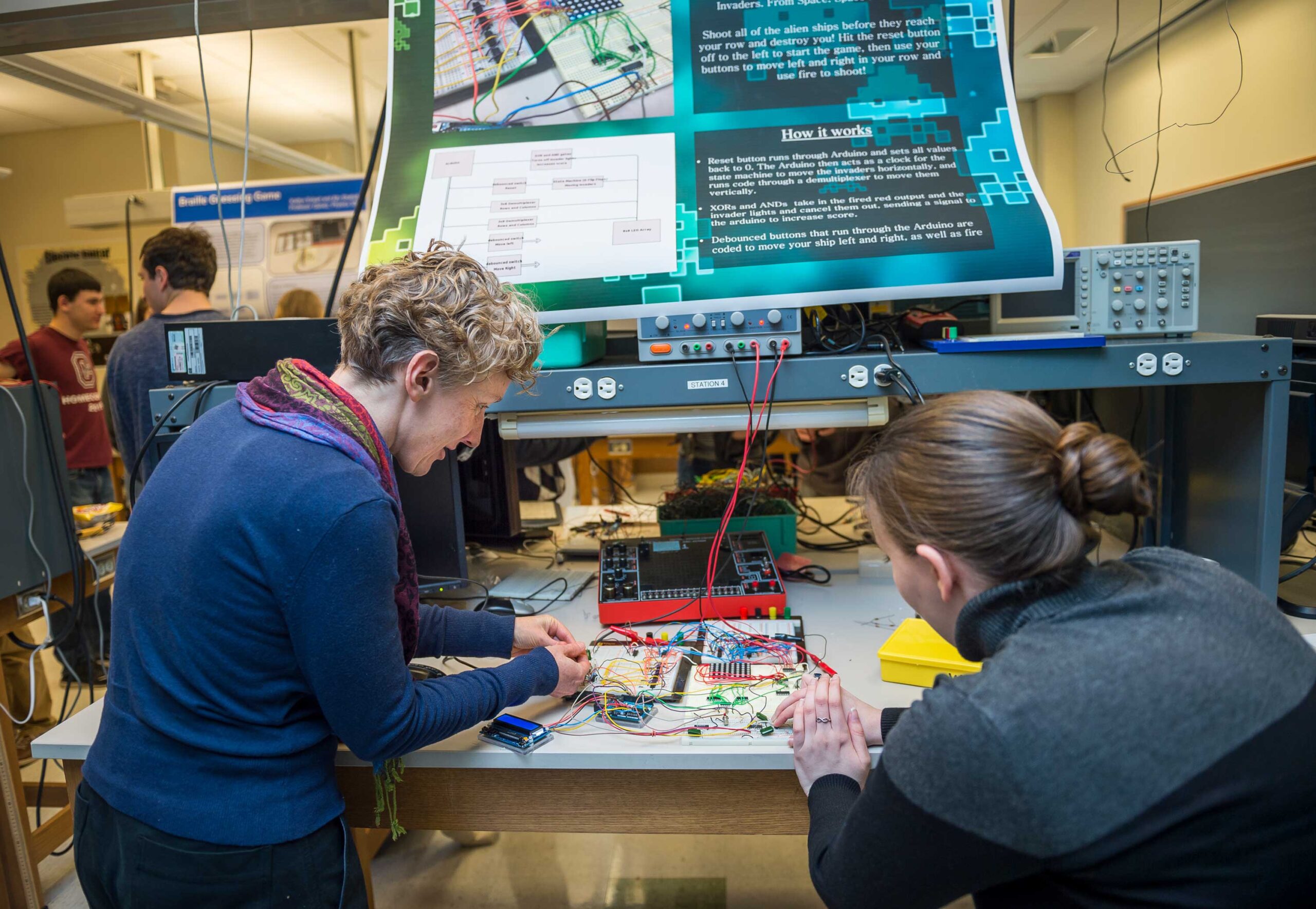 Excerpted from The Physics Teacher

Much effort has been expended to uncover forgotten contributions by women in physics and publicize examples of female physicists to students, largely to help female students see themselves in physics… In addition to looking at the lives of women who did become physicists, I suggest that we need to look at why so many didn’t. In this article, I’ll present a brief sampling, looking at the educations and opportunities of three important male physicists — James Clerk Maxwell, Robert Millikan, and Albert Einstein — in different countries and times, and comparing them to those of their female peers.

James Clerk Maxwell, who formulated the theory of electromagnetic radiation, was born in Scotland in 1831. He was educated at home by his mother until age 8, then at age 10 entered Edinburgh Academy…  While there were some secondary schools for girls in Scotland, called “young ladies’ institutions,” these gave limited instruction in science and mathematics.13 Girls were expected to learn to play an instrument, sing, knit, and sew.

[Maxwell] entered Edinburgh University at age 16, then Cambridge University in 1850, at age 19. These institutions were not open to women until 1869. While Maxwell did his most important work while employed as a professor at Cambridge, Aberdeen, and King’s College, the first appointment of a woman to a professorship in the U.K. was not until 1908. Those women who made contributions to physics in the U.K., such as Hertha Ayrton, were not able to support themselves by doing this work.

Millikan was born in 1868 in Illinois, attended Oberlin College for an undergraduate and master’s degree, then in 1893 received a fellowship from Columbia University to study for a PhD. His Nobel Prize–winning work (determining the charge of the electron and measuring h via the photoelectric effect) was done while a faculty member at the University of Chicago, in a position starting in 1896.

At this time in the U.S., education was open to girls … By 1900, 228 women had earned doctorate degrees (2,372 men had done the same). One reason for this factor-of-ten difference was the difficulty for women in obtaining fellowships. Columbia University, where Millikan earned his PhD, reserved its most generous fellowships for men ($650, of which $600 was required to cover a year’s tuition), and “out of thirty-two scholarships of $150, women could apply for only four.”15

For those women who could manage the finances to earn a PhD, there was little open to them beyond the degree… Women were hired to be “computers” and “assistants” despite possessing the same PhD credentials as men hired to be professors and researchers… Faculty positions at women’s colleges, which were the main options open to women PhDs, were open only to unmarried women, and “any women already on the college faculty who did marry, as happened on occasion, resigned immediately.”16 In contrast, Millikan married in 1902 without incident.

Finally, consider perhaps the most famous physicist of modern times, Albert Einstein. Einstein was born in 1879 in Ulm, Germany, and entered primary school in Munich in 1885. He left school in 1894 without a degree. He studied for the “school-leaving” certificate, which he passed in 1896 and entered university in Zurich with the goal of becoming a teacher, then earned a living through teaching, tutoring, and, famously, as a patent clerk, before submitting his PhD dissertation in 1905.

German girls’ education was still separate from boys’; did not prepare them for university; and was particularly lacking in science and mathematics… Women were explicitly banned from German universities from 1879. (The ban was lifted at individual universities beginning in 1900 and was not fully lifted until 1918.)

While it was certainly possible for a woman to develop an interest in science or mathematics on her own and pursue it outside of normal secondary education, it is also fairly certain that many women never had the opportunity to discover or pursue this interest, or internalized societal pressures telling them that they did not belong. “As late as 1959, women composed less than 2 percent of the faculty of West German universities, and a survey revealed that 79 percent of male professors did not think that there should be any women in their ranks.” … The ban on married female school teachers was not lifted until 1907 and, even then, only for women in exceptional circumstances.17

How did any women succeed?

These examples are not intended to say that it was impossible for women to contribute to physics, but just that the odds were so stacked against them that it is unsurprising that so few were able to make major contributions to physics research.

In the biographies of those women physicists who did succeed, we see the simultaneous presence of several unusual advantages. Marie Curie’s family supported girls’ education, although that support could only provide for primary education. She studied on her own to prepare for university; worked as a governess to earn money; and then traveled to France to study, where she lived in extreme poverty, in an attic room without heat, lighting, or water, studying constantly and nearly starving. Her PhD research was possible only because she had married a physicist, Pierre Curie, and was able to use a shed outside his institute to purify radium. Her father-in-law, Eugène Curie, cared for her daughter Irène, allowing her to continue her research following her daughter’s birth. And while there is now no question of her contribution to the research, she was not nominated for the 1903 Nobel Prize, and only won it because her husband, Pierre, requested that she not be omitted. Even after receiving the Nobel Prize, she was not awarded a faculty position at the Sorbonne until she was appointed to Pierre’s position following his death in 1906.18

Family connections were also important to Emmy Noether, a groundbreaking mathematician and physicist. Her PhD adviser was her father’s friend and colleague. She worked without compensation following her PhD in 1908 (presumably supported by her family), serving as a dissertation adviser to many students and publishing important work, and was not appointed to a salaried position until 1923.19

Lise Meitner, who discovered nuclear fission, was lucky enough to have been born in Vienna. The University of Vienna was one of a few institutions that, through the dedication of leaders, developed cultures more welcoming to women.20 She was in one of the early groups of women allowed to take its entrance exam, for which she prepared with a private tutor paid by her family. She received her PhD in 1906, and in 1907 she traveled to Berlin and became affiliated with the Friedrich-Wilhelm-Universität. It was not at that time open to women, but, as a compromise, she was permitted to set up a lab in a basement room (a former wood shed) with a separate entrance. After five years of working in Berlin, during which time she published more than 20 papers, and reached the age of 34, she still had no position and was supported by her family. Finally in 1912 she received an appointment to grade Max Planck’s students’ papers, and in 1913 became a “scientific associate” at her institute.21

Histories such as these can explain why women are so underrepresented in founding roles in physics. But presenting this history as an explanation for the dearth of women in the past will surely lead to another question — why are there so few women now? The dominant culture of physics is still male (even as “male” is defined as “genderless”).22 Women report feeling pressure to adjust how they dress or speak in order to fit into the field.23 The intensity of sexual harassment has decreased … but still, in a survey of female undergraduate physicists in 2017, approximately three-quarters reported experiencing sexual harassment in their physics activities.24

The conflict between marriage, child rearing, and physics research made careers in physics difficult in the 19th century, and this challenge continues to the present day… A recent study asked 74 male physicists and biologists about work and family roles. One respondent concisely summarized the problem for women. When asked whether having children poses challenges for scientists, he responded, “No, absolutely not. That’s why you have a wife.”29

Finally, the opinions expressed about women’s ability to do science in the 19th century seem either quaint or horrifying today. Dr. Henry Maudsley wrote, “Their nerve-centres being in a state of greater instability, by reason of the development of their reproductive functions, they will be the more easily and the more seriously deranged.”30 The Darwinian arguments that female brains were not organized to do science are reflected in experiences of female students in the present day, such as “being told: ‘guys are better at this so you should do this (other thing).’”31 Or, as Nancy Hopkins of MIT wrote in an online forum: “I have found that even when women win the Nobel Prize, someone is bound to tell me they did not deserve it, or the discovery was really made by a man, or the important result was made by a man, or the woman really isn’t that smart. This is what discrimination looks like in 2011.” 32

The lack of opportunity discussed in these cases may seem obvious to faculty “of a certain age,” who remember when the Ivies became co-ed and grew up in a time when the main professions available to women were teaching and nursing. But it may not be obvious to current students, whose great-great-great-grandmothers were contemporaries of the pioneering women who first entered universities. Some may still have lingering questions about women’s ability to do physics (as is shown by the comments of male classmates). To help answer those questions, I suggest that instructors find ways to incorporate some of this material into their classrooms. By acknowledging the past, we can hope to move forward.

The author thanks Margaret Rossiter for introducing her to the scholarship and literature of the history of education.

This work is reprinted with permission of the copyright holder, the American Association of Physics Teachers. It appeared in The Physics Teacher 58(6) and may be found in full at https://doi.org/10.1119/10.0001830.