A Contraption for the Climate 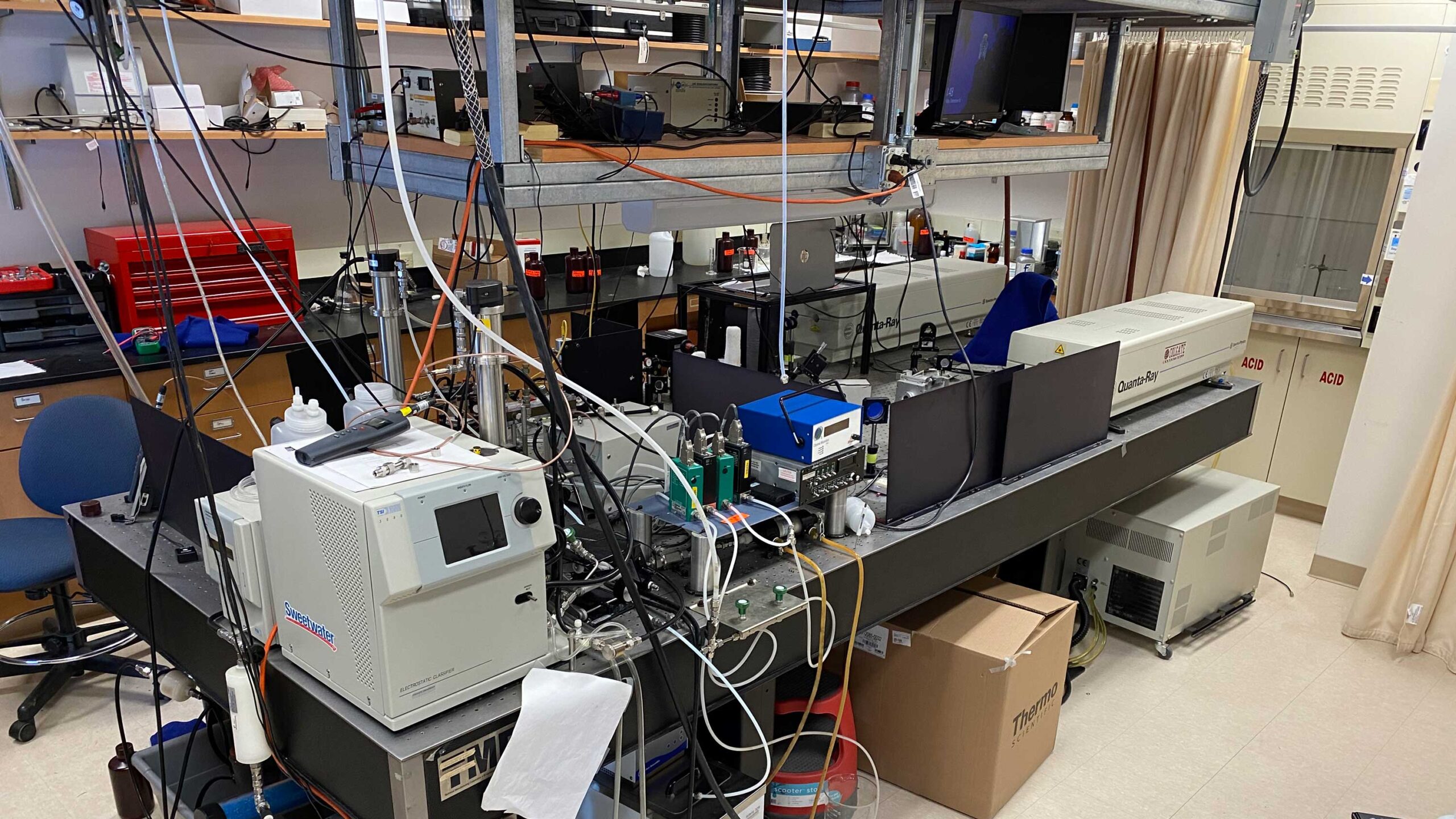 Prof. Ephraim Woods and his students built an apparatus to understand sunlight-driven reactions in Earth’s atmosphere.

To the non-scientist, the apparatus in Professor Ephraim Woods’ chemistry lab is a lot to take in. Two lasers — beige, boxlike, and stamped with the model name “Quanta-Ray” — dominate a banquet-sized metal table. Stoppered flasks cluster near steel cylinders. Tubing and cables overwhelm the eyes. Everything is connected, plugged in, or both. The whole thing feels held together delicately. “I don’t think there’s any duct tape on it at the moment,” Woods says. “Not that we haven’t ever used it.”

Woods and his undergraduate research assistants study reactions in Earth’s atmosphere that contribute to climate change. High above us, dustlike flecks of solids or moisture called aerosols stay suspended and help determine how much sunlight hits the Earth’s surface. Aerosols scatter and absorb light, and they are seeds for cloud formation. But aerosols can carry pollutant molecules belched from cars and factories, or natural odor molecules from plants. Sunlight chemically transforms these hitchhiking molecules in ways that affect the aerosols’ cloud-seeding and light-scattering ability, thus driving changes to the climate.

Sunlight-powered chemistry happens over a few billionths of one second. To study it, a scientist would need a way of looking at aerosol particles over and over again at billionth-of-a-second intervals to follow what is happening. While chemists can do experiments at that incredible speed, they couldn’t yet do them on aerosols. That is what Woods set out to do, building upon others’ work, adding his own innovations, and assembling existing technology to make something new.

One challenge is that, while aerosols are plentiful outdoors, they come in all sizes and compositions. When figuring out how something works, it’s easier to test a uniform system. Woods and his students generate aerosols in the lab with a device that works like a perfume atomizer, except theirs churns out aerosols continuously, and they don’t use the aerosols as is. Another component of the apparatus filters the aerosols by size. Another sets the humidity for the experiment. Even air is too complicated for this work; oxygen is reactive, so Woods’ students use pure nitrogen gas instead. No detail escapes control in the Woods lab.

At speeds of up to 20 miles per hour, the custom-blended aerosols travel through rubbery, conductive tubing to the centerpiece of the apparatus — the pair of lasers. The first laser mimics sunlight, zapping the aerosols to kick off chemical transformations. The second laser checks to see what happened. It’s tuned to interact only with molecules Woods and his students are seeking. If the laser “sees” a molecule, it imparts an electric charge that a final instrument measures. A computer controls exactly how much time elapses between the two lasers’ pulses, down to a few billionths of a second. By repeating the experiment and changing the time gap, Woods’ students can track how long their molecules of interest last, information that might someday help other experts understand how certain types of aerosols affect the climate.

It takes hard work to maintain something with that many moving parts. Gauges double-check everything from the lasers’ timing to the aerosols’ sizes. Sometimes things go wrong. So one of the lab’s recent acquisitions is an electric guitar — a Fender Stratocaster, to be specific. It’s there “for the venting of frustrations,” Woods says, and for celebrating successes.

Students who do research with Woods become diligent problem-solvers. But they’re not simply repair technicians. For Woods, it’s important that they understand why they’re working with this hulking hodgepodge of instrumentation. Call it the 30,000-foot view.

“The more we know about chemical transformations of aerosols, the better we can model the direct and indirect effect of aerosols on climate,” Woods says.

The big success came last summer, when Woods published a paper in ACS Earth and Space Chemistry demonstrating that the apparatus worked. He took to Twitter to express his gratitude to his seven undergraduate coauthors: Oliver Harris ՚19, William Leiter ՚20, Nora Burner ՚20, Pomaa Ofosuhene ՚18, Alexandra Krez ՚18, Mark Hilton ’17, and Kathleen Burke ՚17. “When I started at Colgate in 2002, I often heard, sometimes from grant reviewers, that you can’t do experiments like this with undergraduate researchers,” Woods says. “Thankfully, I don’t hear that much anymore.”