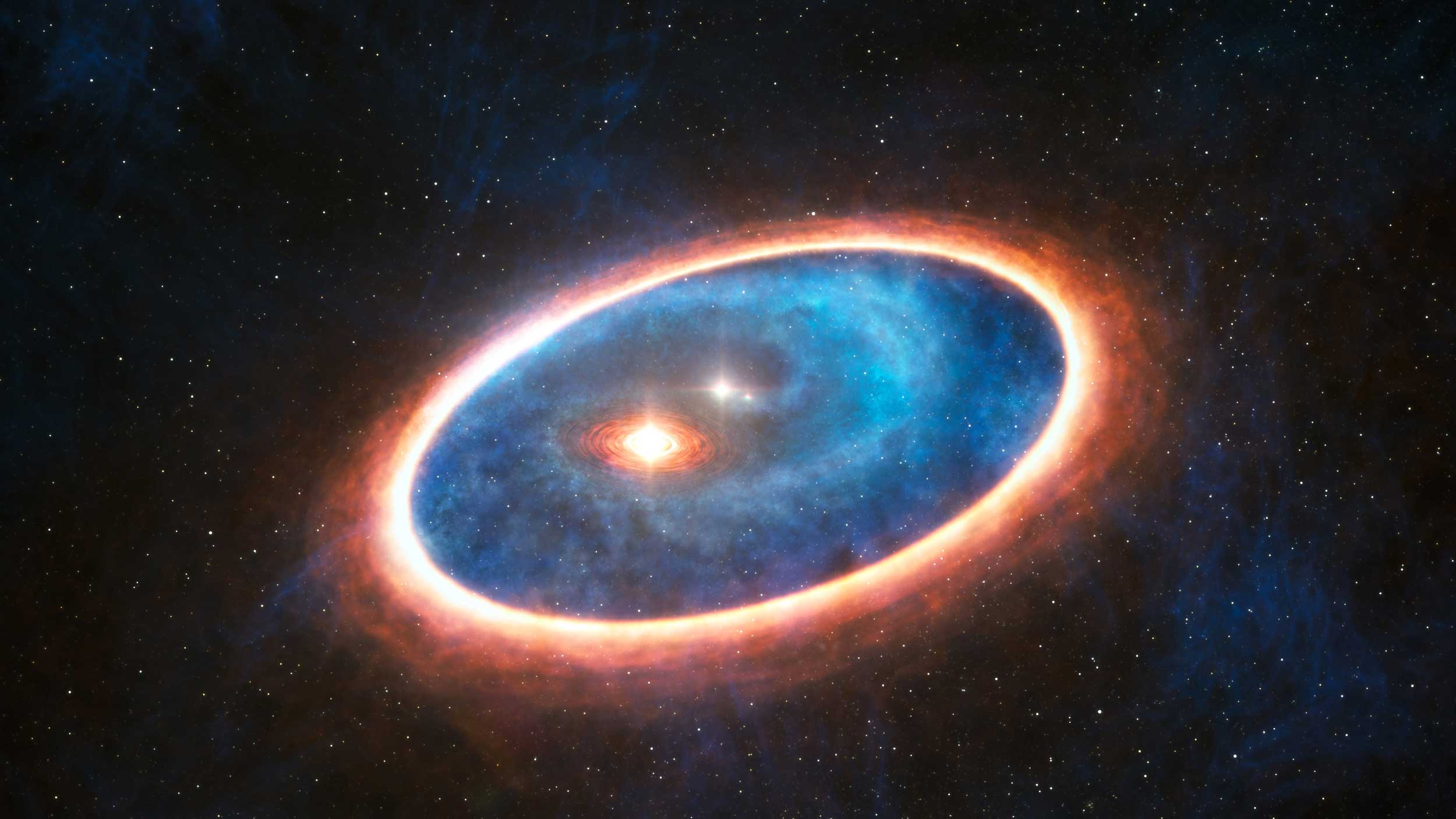 Astronomer Jeff Bary investigates the disk of gas around a trio of young stars, finding clues that planets may be forming within.

The night sky is home to countless hidden planets. Thanks to planet-searching efforts of the last decade or so, astronomers now realize that most of the many billions of stars in our Milky Way galaxy must have planets circling them. Most of the time, planets outside our own solar system are too faint for telescopes to see, hidden from view by the glare of the stars they orbit.

But more and more, astronomers are puzzling out what the myriad planetary systems in the night sky must look like by watching for the effects planets have on their surroundings. Recently, some cutting-edge telescope images have revealed views of the swirling disks of gas and dust that envelop very young stars — and potentially, planets that are forming within these disks.

“I’ve always been interested in these disks and how they evolve into planetary systems,” says Jeff Bary, associate professor of physics and astronomy at Colgate.

Bary has dedicated much of his time to studying the disks around young stars. One of the objects he and his colleagues are studying is called GG Tau, a few hundred light-years away in the constellation Taurus. GG Tau is not a lone star like our sun but a cosmic mobile of five stars in a complicated dance. The centerpiece of the arrangement is a trio of stars, called GG Tau A. The brightest star in GG Tau A is called the primary star. Its main dance partner is a pair of tightly knit stars that swing around each other, even as they are locked in that wider, more stately waltz with the primary star. Farther away, another pair of stars, called GG Tau B, orbits the trio.

A large disk of gas and dust, which surrounds the three stars of GG Tau A, is characterized by a dense and massive ring-like structure. Bary and colleagues often refer to their collaboration as the “Fellowship of the Ring.” The mass and structure of the disk was a bit of a mystery. Given the couple of million years that have passed since the stars would have formed from the disk, the material in the disk should have disappeared — either swallowed up by the stars or blown off into space.

“It was a little bit difficult to explain how that really massive disk has remained in that system for as long as it has,” Bary says. One possible explanation, he says, is that planets are forming in the disk; the gravitational pull of planets could act as a shepherd and keep the disk around longer.

To tackle the mystery, Bary and collaborators have worked to get increasingly detailed looks at this star system, its disk, and how gases are distributed there — concentrations in or outside the disk could provide clues as to what’s happening in this faraway star system.

“It happened to be not like anything we expected,” Bary says. The molecular hydrogen was glowing brightest not in the disk surrounding the trio of stars, and not immediately around the primary star, but in the wide gap that lay between the disk and the three stars it surrounds. Gas was likely flowing off of the large disk and falling into another, smaller disk that sits around the primary star, crossing a gap several times as wide as the distance between the sun and Pluto. This was one of the first examples found of what astronomers call streamers — gas and dust being syphoned from a large outer disk to a smaller, inner disk in a star system.

Later, Bary and collaborators used the Atacama Large Millimeter Array (ALMA) Observatory in Chile, one of the largest arrays of radio telescopes in the world, to get an even closer look. ALMA images of GG Tau A showed that carbon monoxide gas also seemed to bridge the large outer disk and the primary star. In these images, Bary and colleagues also noticed a particularly bright spot of glowing gas within the outer disk. A planet could be forming at that bright spot, they thought, since a newly forming planet would pull in gas from its surroundings, heating it up and making it glow brighter than the rest of the disk around it.

To gather more clues on whether or not a planet could be at that bright spot, Bary and collaborators used ALMA to obtain new images of GG Tau A at an even higher resolution. With the higher resolution, they saw that gas in the outer disk formed spiral patterns — almost like the spiral arms of the Milky Way galaxy, but on a much smaller scale.

“Any time you see spiral structure, that’s interesting because you can create that spiral structure by making some planets,” Bary says. When planets form in a swirling disk of gas and dust, their gravity can make the disk material clump in these spiraling patterns.

Earlier this year, some of Bary’s colleagues announced the results of computer simulations they ran of the GG Tau A system. They found that the spiral patterns in the disk could be created by three planets forming within it, including one at the location of the bright spot they had observed in the earlier ALMA images.

In the future, Bary hopes to use NASA’s James Webb Space Telescope — planned to launch in the next few years — to study this bright spot in greater detail. JWST’s capabilities would let Bary and the Fellowship look for further signs that a planet might be pulling gas onto itself there.

In preparation for studying how planets collect gas as they form, Bary is working with students at Colgate University and through the Keck Northeast Astronomy Consortium program to study how other cosmic objects gather gas. In June, Bary and five students used a telescope at the Apache Point Observatory in New Mexico to collect that data on the formation of small stars and objects called brown dwarfs. Ultimately, the work should help build a more complete picture of how stars and objects as small as planets grow and evolve into the planets and planetary systems that populate the Galaxy.

“Today, we see direct evidence [of planets forming] and the influence that these forming planets have within their disks,” Bary says. “And that, I think, is another huge jump forward in our understanding of how planetary systems come into existence.”