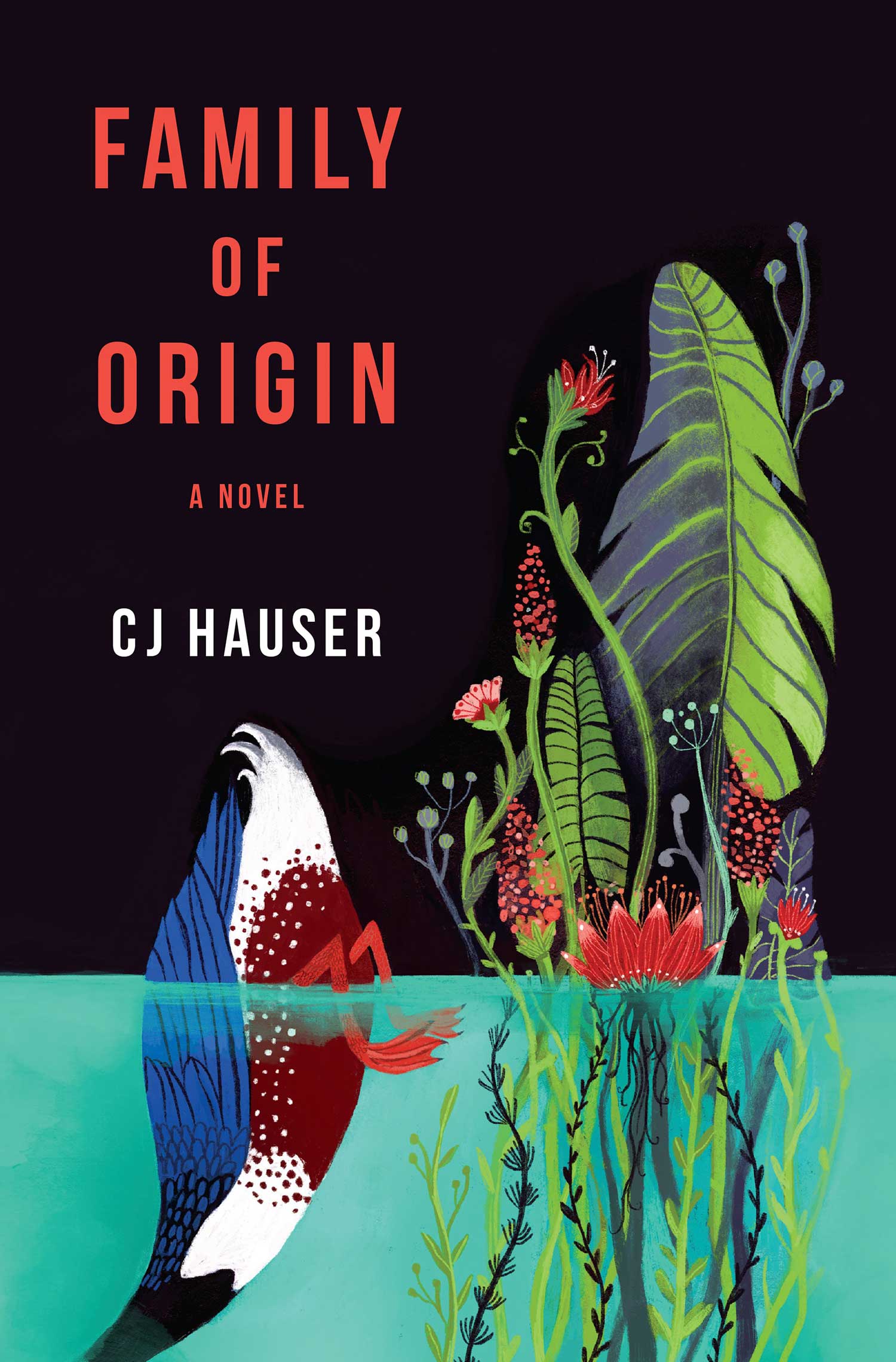 The southside beach Gates took them to was nicer than Ian’s. There was surf, and pipers ran along the shore like urgent children. Esther Stein and Gates were neighbors, and both of their shacks were raised on tall stilts, decks built out in front. The steps to the decks were warped in a way that suggested the tide ran up them. Esther had an ancient canoe tied to a post with a mezuzah fixed to it.

Esther spoke in the strong honk of a Long Island accent.

The Greys waved at the small, wrinkled woman in a deck chair who was looking at them through binoculars. She sat next to an inflatable baby pool, neon blue, bulbous, and patterned with beach balls.

Hello, Gates, Esther said. I haven’t seen you at home much. Are you camping out?

Gates waved at Esther without saying anything and headed for her own house, which had a bright yellow kayak tied out front.

Children, come! said Esther Stein, and the Greys climbed the water-warped stairs to meet her. They were adults, yes, but there was a part of them that longed for someone to make them small again. To send them back in time to when mistakes had not been made and relieve them of their own agency. And so, when Esther called them children, the Greys obeyed. Children. It made them young. It made them Ian’s.

They sat in low chairs next to Esther’s patio table with the baby pool on it. They crossed their hands in their laps, trying to be deferential as they had been taught to do with the old and the insane. Esther was eighty if she was a day. In a bin next to her chair were a pad of lined paper, multiple pairs of binoculars, a stopwatch, a mess of pens, and a small device that looked like a miniature fan.

Well, I think it’s wonderful you want to talk about your father, Esther said. Such a charming man. Such a loss.

We’re mostly interested in his research, Nolan said. Elsa rolled her eyes, but he continued. Did you know much about it?

That’s rich, you asking me. Esther poked Nolan in the chest.

You’re the one who has all his notes.

We aren’t biologists, Nolan said. They don’t mean much to us.

Esther shrugged. I don’t know the specifics, but you’ve got seven scientists out here trying to show how screwed we all are and then Ian —

Esther cut herself off and lifted her binoculars. They were on a long beaded chain that sparkled pink and green. Elsa suspected Esther had made this chain herself.

Oh! Esther said, spying something delightful. She handed Elsa a pair of binoculars. Sweetheart, I’m going to need you to help me with a behavior sample. She thrust a pad of paper and stopwatch at Nolan. You log.

Nolan took the stopwatch. It seemed rude not to. We don’t really know anything about birds, he said. We just had a few questions about —

Esther gestured to Elsa. Quickly, dear. Do you see them?

Elsa found the binoculars enormously heavy. I don’t really know how, she said, although this wasn’t strictly true. When she was small, Ian and Ingrid had taken her bird-watching on Sanibel Island several times. Elsa wondered if Leap’s had ever reminded Ian of those summers.

Scan the shore over there. Do you see the pair? Esther said.

Elsa lifted the binoculars and scanned. The sight was fuzzy, and it felt as though the lenses were too far apart. Or like her eyes were set too close together. But Elsa pushed the barrels together and twisted the focus and there were the buffleheads, standing on the shore, dripping wet. Their white caps looked smooth, and the green around their necks was striking when wet. Elsa could see beads of water like ornaments in their wings. What had become of the binoculars Ian had given her on Sanibel? They’d been pink, she recalled; she had picked them out at the gift shop, pink instead of functional black, a choice Ian had disapproved of. Still, he had writ ten her initials on the nylon cord in Sharpie, and she remembered feeling inordinately proud of this. To be trusted with equipment.

I see them, Elsa said.

Nolan, are you ready? Esther said.

I don’t know, he said. Nolan felt panicked. He liked to be prepared for tasks. He didn’t like being bad at things, and without preparation he was bad at most of them.

Just write down whatever I say they’re doing, Esther said. Comfort, Resting, Locomotion, Interaction, Alert, or Foraging. There are two ducks, so I’ll tell you two things and just write them on a fresh line.

Set the watch, Esther said, and every fifteen seconds, I want you to call out “Mark” and I’ll give you data, okay?

Nolan set the watch. It beeped. At fifteen seconds he said, Mark?

Nolan wrote down Resting, twice, next to the time on the watch.

The second bufflehead was pecking at something along the shore.

Because the second one is eating? Elsa said. Exactly, Esther said.

They went on like this and soon fell into a comfortable rhythm.

Elsa found she enjoyed Esther’s narration of the ducks’ activity.

Good girl, Esther said. Locomotion, Comfort then. He’s preening. You take over with your young eyes. I’ll check you.

In spite of herself, Elsa was proud. Her arms ached from holding up the binoculars, but she didn’t dare put them down or she’d lose her sight of the ducks.

Nolan notated the actions. After a while, he realized it would be easier to divide the sheet into two columns, one for each duck, and to list only the first letter of the word Elsa said. He revamped the sheet and between observations he scrawled a key at the top of the page. He numbered out the time slots in increments down the page. It was quicker this way, more efficient.

Elsa put down her binoculars and the immediate world swam up to meet her: Nolan chewing on his pen, sweeping his hair behind his ear as he studied the notes he’d made. How much easier it was to look at something through the scope. Detailed, tiny, and comfortingly far away.

What have you done here? Esther said. Is this shorthand?

I made a key, Nolan said. It’s much faster, which means it’s more accurate too. You could make copies of it even, and just have the template ready to go.

Esther frowned. I’ll just transcribe the notes over, don’t worry. You did a good job.

But don’t you eventually have to log this information anyway? Really, you should have a digital spreadsheet open, with the template in there. That way, you could immediately calculate percentages.

I appreciate the spirit of ingenuity, Esther said, but I’ve been doing observations this way for twenty years.

Let her do it the way she wants, Nolan, Elsa said.

But it’s better this way, he insisted.

Esther laughed. Every generation wants to reinvent the wheel, she said.

I was just trying to help, Nolan said.

Charming, helpful millennials, Esther said, and took out the small fanlike device. She began taking a reading of the wind speed.

Nolan asked, What do millennials have to do with anything?

You’re neither of you much like your father, you know, Esther said.

She’s saying we’re not as smart as Dad, Nolan said.

Well, everyone knows that.

Don’t even. We’re so much dumber than Dad.

Esther sighed at Nolan’s sheet and put down the fan, notating something.

Do you need us to do it again? Nolan asked. I can do better notes his time.

I’m sorry, Nolan said. Are you under the impression you just won?

It’s not really a win/lose outcome, Esther said. It’s data collection. She was now staring through a tiny black sight at the ducks.

What exactly are you trying to get out of this? Elsa asked.

Information about shifts in the ducks’ behavior, Esther said. To support my theories.

You really moved here for these ducks? Elsa asked.

Nolan handed back his stopwatch, but Elsa found she didn’t want to give up her binoculars.

Everyone says they moved for the ducks, Esther said. But it’s not for nothing that you wind up out here. We’re all a bunch of old kooks, if you ask me. Don’t tell the others I said that. They’ve been trying to kick me out for years, but I’m the only one who publishes anything, so they can’t.

What have you been publishing? Elsa asked.

Bird counts. And an analysis of mallard migration shifts last year. They fired me from the Audubon Society board in ninety-eight, but I got my degree at Cornell, and the alumni community is tight, so some people will still publish me.

It’s just, if you went to Cornell, what are you doing here?

So Esther Stein told them her story. Everyone on Leap’s had one.

From FAMILY OF ORIGIN by CJ Hauser. Copyright © 2019 by CJ Hauser. Reprinted by permission of Doubleday, an imprint of the Knopf Doubleday Publishing Group, a division of Penguin Random House LLC.