Get to Know: Delvin Moody, master’s degree student in religion and political theology 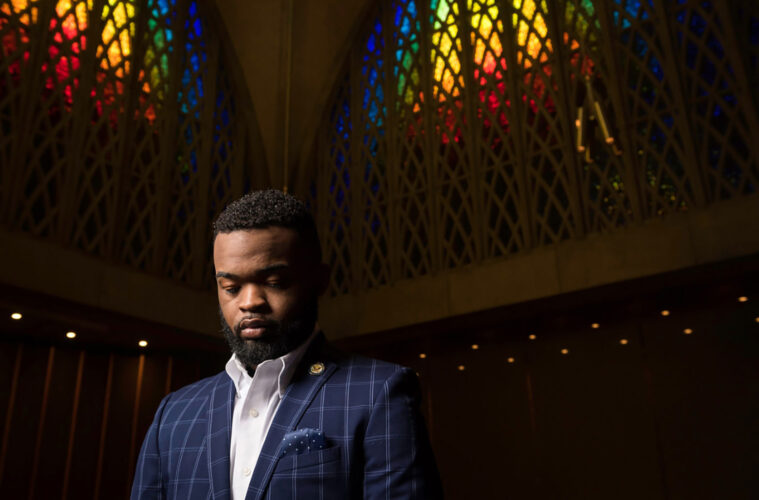 Delvin Moody had an early calling. At 10 years old, growing up in the Pentecostal-Holiness Church where his grandmother preached, he already felt the pull to follow her path. “I don’t know what wisdom I had at ten years old, but I felt called to impart a message, to become a minister.” By 13, he was leading services, profiled in his hometown paper, the Utica Observer-Dispatch.

“That foundation later would turn into not just preaching about a social revolutionary — a Palestinian Jew by the name of Jesus — but moreso, as Walter Rauschenbusch would put it, preaching the Social Gospel, and seeing how faith was a precursor of social activism,” said Moody.

Today, combining his faith, intellect, and personal drive to revitalize his community, Moody is pursuing a master’s degree in political theology at Colgate while also representing his Cornhill hometown neighbors on Utica’s Common Council. He’s the youngest-ever elected official of the city and the youngest elected black official in New York State.

“I felt that people were missing a heavy component in the conversation of, how do we transform the inner city? I felt that I had a few ideas, and I earnestly felt that I was the best person to represent Cornhill,” he said. “Together with meditation and prayer and talking with family, I felt it was time to step forward and become a public servant.”

In Colgate’s department of religion, he’s researching the interplay of politics and religion “through the lens of the African-American experience, particularly looking at the Gullah Geechee people in South Carolina as well as Africanized slave religions in the Antebellum South,” he said. He noted that his graduate adviser, Harvey Sindima (philosophy and religion) really “helped me to articulate and sharpen my thoughts” on the project.

“Delvin’s view that religion is a liberating force, especially within the prophetic tradition of Black Christianity in America, is not simply a matter of intellectual interest, but the very embodiment of his being as a preacher and a politician,” said Sindima.

A well-known figure in Utica since his youth, Moody benefited from three regional opportunity programs, Young Scholars Liberty Partnerships Program, Junior Frontiers of the Mohawk Valley, and On Point for College, who honored him with their student Star Award at their annual banquet last year, where he offered the opening and closing prayers.

Now he’s paying those opportunities forward through his day job, as a program specialist for Mohawk Valley Community College’s Gear Up program helping middle-schoolers get through to high school, explore college options, and become career-ready. “From 9:00 to 5:00, I help kids become viable citizens, and then from 5:30 to 9:00 I help their parents,” he chuckled.

Among his other public service involvements, Utica’s Jewish community selected Moody for a delegation to Israel during his undergraduate years at University of Rochester, where he was studying religion and political science. And this year, the treasurer of the New York State Young Democrats found his way onto the 22nd district Democratic primary ballot for delegate to the national convention, representing Bernie Sanders.

In all his pursuits, Moody said, he goes by the motto, “The worst anybody can tell you is no. If I have a vision that I feel strongly about, my faith tells me there’s gonna be provisions somewhere down the road. I live by that.”