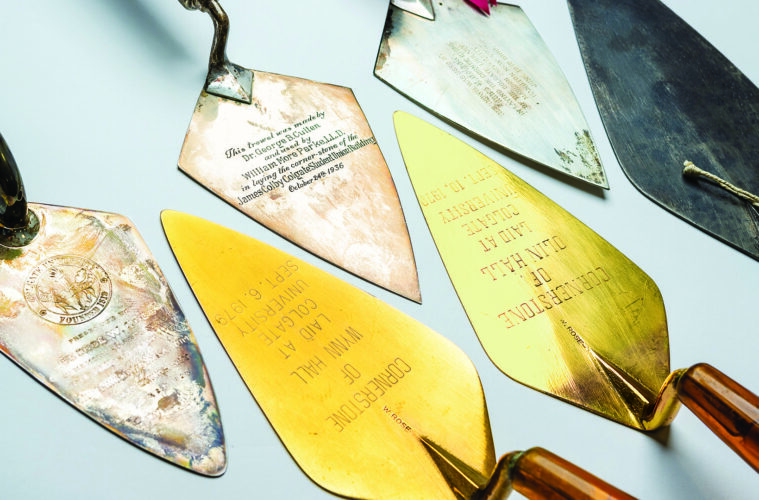 Colgate’s facilities are entering a new era, with guidance from the Third-Century Plan.

Expanding campus to fit the needs of a growing elite liberal arts university is also part of our history. Just take a look in Colgate’s Special Collections and University Archives, which houses a collection of ceremonial trowels made to commemorate such strides. Kept in small boxes, some carefully placed in tarnish-preventing cloth, these bits of realia give us a glimpse into the way forebearers thought about the University’s path forward.

The Building: First the library, later the administration building, and now the home of Colgate admissions, James B. Colgate Hall has served as the doorway to campus since its opening in January 1891. Administrators wanted to “remain competitive with other colleges and universities,” according to Becoming Colgate, and they needed new facilities, like a library, to achieve that. Designed by architect Edwin A. Quick, the building was built to be fireproof to protect its collections. As the University grew, so did its collections, and by the 1930s it was nearing capacity.

The Trowel: Silver with an ivory-colored handle and maroon ribbon, the inscription reads: “This trowel was used by James B. Colgate in laying the corner stone of the Colgate Library. Madison University. Hamilton New-York. June 19, 1889.” It was made by Harold A. Heady.

The Building: Now part of the Brown Commons, Andrews Hall was built at a time when students preferred living in the village, or in fraternities down the Hill, according to Becoming Colgate. The administration hoped that the new residence hall might help Colgate become comparable to other East Coast colleges. “Built in the Tudor style, of native stone, the hall is in keeping with the rest of campus buildings, which it overlooks from the south,” reads a 1926 special edition of the Maroon. “It can easily accommodate 84 men. Each suite is featured by a large fireplace.” The building was a bequest of Richard Colgate.

The Trowel: This trowel, which laid the cornerstone of Andrews Hall, was a gift of Mrs. Leslie G. Parker. It has a wooden handle and silver blade.

The Building: In the 1920s, Colgate experienced a period of expansion. Approximately 600 men were enrolled at the University at the time, and Huntington Gymnasium was built to support the development of athletics.

The Trowel: This heavy silver trowel was made by George W. Welsh’s Sons Jewelers in New York City. The inscription reads: “Presented to George W. Cobb in memory of his laying the cornerstone of the Huntington Gymnasium Colgate University November 21st 1924.”

The Building: Like some other buildings on campus, James C. Colgate Hall was constructed with stone from the University quarry. It was designed to house the essential services for students, like a dining hall, post office, and activity spaces.

The Trowel: Made by former Colgate president George B. Cutten, it was used by William More Parke (president of the Board of Trustees) to lay the cornerstone of James C. Colgate Hall. Stored in a tarnish-preventing silversmith’s cloth, the inscription on the blade refers to the building’s original name, James Colby Colgate Student Union.

The Building: Colgate’s new library opened in 1958 and was later named for President Everett Needham Case. The building was expanded in the 1980s and was renovated again in 2007, reopening as Case Library and Geyer Center for Information Technology.

The Trowel: The box holding the trowel for James B. Colgate Hall contains a card with a note dated June 21, 1958, from Colgate historian Howard D. Williams ’30: “This trowel was also used by Dean Carl A. Kallgren and others for laying the cornerstone of the new library building 20 June 1958.” Kallgren was dean of students at Colgate who later established the Kallgren Fund, which provides travel grants for faculty members.

The Building: The home of Colgate’s biology and psychological and brain sciences departments, the building has state-of-the-art equipment to help students and faculty members succeed in teaching and research. It is currently being renovated and expanded and will serve as the home for the Robert H.N. Ho Mind, Brain, and Behavior Initiative.

The Trowel: The translucent, amber-colored handle is engraved with the name of the maker, W. Rose.

The Building: As the University’s chemical science building, Wynn Hall contains laboratories, classrooms, and more. In 2016, the University enlisted B2Q to “model, design, and commission a multi-phase mechanical and architectural renovation,” according to the engineering consulting firm’s website.

The Trowel: Created by the same makers as Olin Hall’s trowel, it’s also similar in looks.