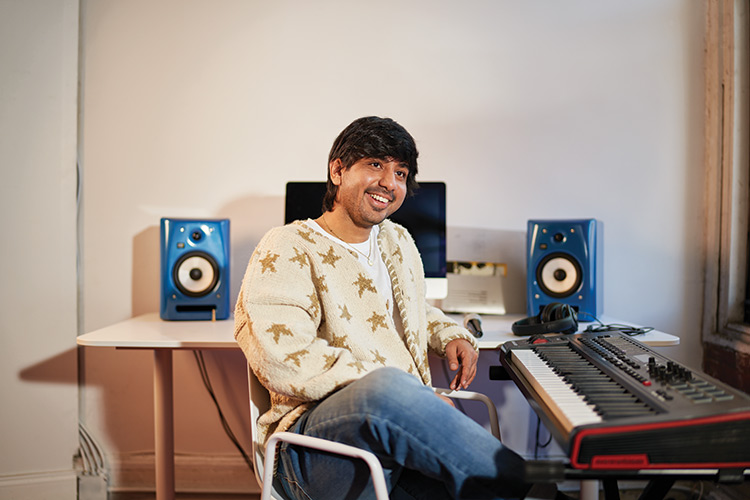 Shav Garg ’15 is revolutionizing the music business in favor of artists with his start-up platform, indify.

At 15, Shav Garg ’15 dreamed of being a musician. He wrote songs on GarageBand and performed on his acoustic guitar, but a music career seemed out of reach. He had no connections and understood that the industry was “stuck in a private equity era where music firms offer one-size-fits-all superstar deals that are 85% in favor of the label,” he says. Even then, he recognized the need for change. Shav (as he’s known in the industry) foresaw an open-source model that would level the playing field for artists and put their interests first. A decade later, he would create the music platform indify to do just that.

While he was a student at Colgate, Shav interned at Warner Music Group and the Indian streaming platform Saavn, where he “realized that streaming was going to take over the world as the main form of music consumption.” He was right.

Distribution services have since enabled artists from throughout the world to upload their work and reach an unprecedented number of listeners within hours, creating “an industry middle class that is exploding and going to define a renaissance of music for the next 10 years,” Shav says.

During his senior year, Shav proposed to childhood friends Connor Lawrence and Matthew Pavia that they create an algorithm that would comb through data from YouTube, SoundCloud, Twitter, Instagram, Facebook, and Spotify to anticipate the next big music stars.

“People get scared of data,” Shav, who majored in economics, allows. “But in this case, data is the fans who are voting for whom they relate to. We don’t sit in an office and tell you whom to relate to. That’s the democracy in the music industry that’s giving artists leverage for the first time against archaic institutions.”

They developed the algorithm in Colgate’s Thought Into Action incubator program and participated in the 2015 Entrepreneur Weekend competition judged by Jessica Alba, MC Hammer, and leadership from BuzzFeed, Warby Parker, and Rent the Runway. They won the competition — and $25,000 to start indify, which they developed in Shav’s parents’ basement after graduation.

By that fall, they had a working version of indify — and discovered their first star. The algorithm surfaced a 17-year-old musician in El Paso, Texas. He was writing songs in his bathroom and recording on his cell phone — but his music had reached 20,000 plays in just a few weeks, and his single “Location” quickly hit more than 100 million streams; today, it’s reached more than one billion. indify featured him on its editorial channels and forecasted the meteoric rise of the artist now known as Khalid.

As indify predicted the careers of more superstars like Billie Eilish and Post Malone, record labels, talent agencies, streaming services, and music companies began signing up for the platform, eager to discover the next big stars.

Shav and his partners had accomplished their original mission to democratize the industry, but they were still frustrated by traditional label deals that exploit musicians. They expanded indify from a discovery tool into a connectivity platform through which musicians can assemble a team of lawyers and funding, management, and digital marketing partners, and draw up contracts all in the same space. The contracts as outlined by indify put artists first with a 50/50 split and a clause that musicians retain creative control. As Rolling Stone stated in a 2020 article, “indify’s new approach is one of the most concrete attempts at changing the way artists are treated.”

Despite his success as an entrepreneur, Shav says, “people identify me as an artist first.” His indie-pop album, too pretty for sunshine, released under the name prettyboyshav, has hit six million plays, and his next album comes out this spring.

“My 15-year-old self knew he was exceptionally talented at music, but didn’t have the opportunity to be a musician because it was an unrealistic dream,” he says. “It’s my dream that indify will enable the next [generation of] 15-year-olds to be able to tell their parents, ‘I want to be a musician,’ and for that to be as normal as being an accountant.”