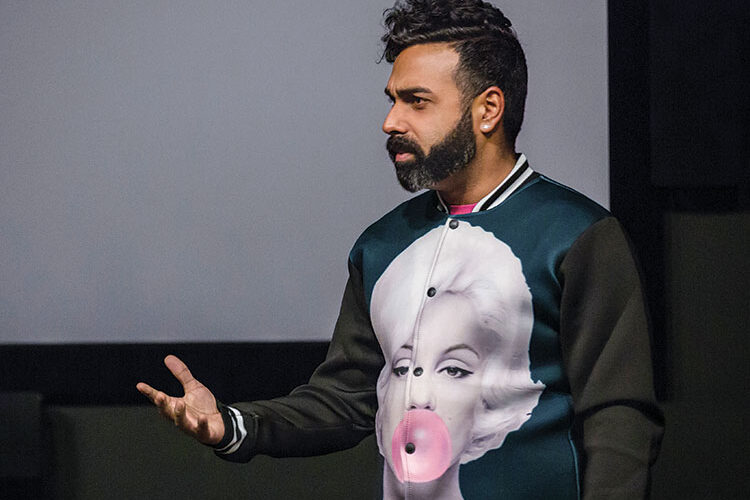 In a densely packed Chicago bar, with Bollywood music blaring, Kareem Khubchandani ’04 danced to the beat. Grooving along with him were dozens of gay Indian men, many of them dressed in drag. He didn’t plan the gathering to take a break from his graduate studies at Northwestern University — it was part of his book research.

Now a professor in Tufts University’s Department of Drama & Dance and the Program in Women’s, Gender, and Sexuality Studies, Khubchandani recently released Ishtyle: Accenting Gay Indian Nightlife (University of Michigan Press, 2020). The book, which he started working on in 2009, chronicles his time researching the subject in Chicago and Bangalore, India, by organizing parties and appearing in drag, thereby fostering a community. The foundation of the book: how nightlife allows gay Indian men to express their authentic selves.

The title, Ishtyle, is an accented way of saying the word “style” in some Indian regions. To Khubchandani, it’s also a metaphor for the way gay Indian men have to change themselves to fit in with social standards. “It speaks to the overcompensation of style that migrants have to do in order to fit into the local cosmopolitan ‘cool’ world,” he says.

Learn more about his research below.

How did you determine the subject matter for Ishtyle?

When I was an LGBT international student [at Colgate], I would travel to New York [City], to queer Bollywood dance parties to be in a space where I didn’t feel like I was the only one. Being in those spaces was transformative; it made me realize there are others like me. That’s where this project was built from.

I saw [parties] like that in Chicago [while at Northwestern], and I saw others like it in Toronto and London. That got me thinking, “What of the rapid globalization allowed the transnational move of these professional migrants?” It is about global labor markets and these men who are made mobile by the economic borders opening, by the U.S. demand for flexible labor. It’s the economic trade and the migration of workers that allows these men to live in cities away from their homes, and practice their sexuality and creativity and pleasures, independently.

You recently wrote about the concept of “fun” as a research method in South Asia: Journal of South Asian Studies. Why should research be fun?

The stereotype of the academic is that we’re boring and stuck in “teach world.” But I had a lot of fun doing my research, and I had a lot of fun writing the book. To play with ideas is fun, to describe beautiful things is fun. And then, to dance till 4 or 5 in the morning was also fun, and that was research.

Criticism is often understood as the thing that kills joy, [but] I think it is actually an opportunity to create relationships. [What’s] also fun is getting feedback on work. It’s an opportunity to learn things. It’s freeing.

Why did you decide to incorporate a playlist into Ishtyle?