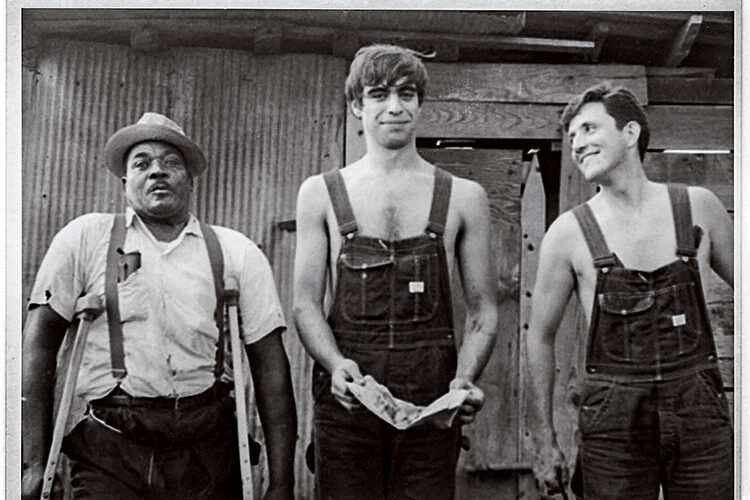 Joel Rosen ’69 (center) during his time fighting for civil rights in the South.

In fall 1966, Joel Rosen ’69 left the Chenango Valley to make the 1,000-mile trek to Huntsville, Ala., nicknamed “The Rocket City” for its NASA flight center and Army Redstone Arsenal. Rosen didn’t travel to Huntsville for his love of space.

He was one of several college students to join the fight for school integration and against voter suppression during the civil rights movement. Through VISTA, a government program created to help alleviate poverty in America, he and others supported Black Americans trying to take hold of their rights in the face of adversity.

As activists John Lewis and Archie E. Allen wrote about Black voter registration efforts in the South: “The history of Black political participation in the United States has been one of struggle — pitting Blacks against those forces that would continue to enslave and exploit minority groups, much like a game of tug-of-war.”

Rosen and other volunteers felt that tug-of-war, often intervening on behalf of Black Alabamans and their political liberties.

“I was going door to door encouraging people to vote,” Rosen says. Because Huntsville was one of the first Alabama towns and cities to legally integrate schools, the volunteers also encouraged parents to enroll their children in the school closest to their homes. The work was tough, and many Black people were resistant to VISTA’s efforts for fear of losing their jobs, or their lives. “People were scared,” he says.

His parents, Rosen remembers, were also scared — for their son’s safety. Raised the son of a small shop owner and a stay-at-home mother in New Canaan, Conn., he says, “my parents were heartbroken, but supportive.” He also had to explain his pull to volunteer for the civil rights movement — and, therefore, his one-year hiatus from college — to Dean Griffith. Rosen says, “I just felt that I couldn’t remain silent; I had to get involved.”

But Rosen doesn’t want to be painted as a hero. “There were people who did so much more and sacrificed so much more — including broken bones and their lives.” He adds that it was power in numbers, the work of a mass of volunteers that made the biggest difference in Black southerners gaining the right to vote and attend the school of their choice.

After his year in Huntsville, Rosen returned to Colgate and finished his sociology and anthropology degree in 1969. He then attended Rutgers University School of Law and served as a U.S. magistrate judge in New Jersey until his retirement in 2006. He now focuses on his mediation practice. After Colgate, he also married his wife, Kari, an activist whom he met during his time in Alabama. All in all, he’s had a good life, he says. “I feel blessed.”

Though it’s been more than half a century since his trip down South, Rosen says the work is not done. “The struggle for voting rights and equality for all persons continues, and we all have a role to play in some fashion.”