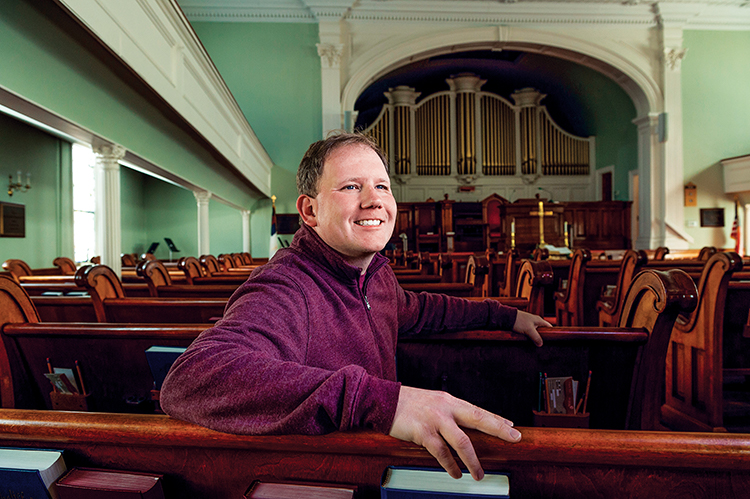 Editor’s note: Professor John Ross Carter passed away shortly after this story was written. A full obituary is forthcoming.

William Stoklosa ’10 remembers sitting in class listening to Professor John Carter lecture about the history of Colgate and its connection to the local Baptist church.

Today, Carter is a professor emeritus who sits in the pews of the historic Hamilton Baptist Church and listens to Stoklosa — who returned to the village last June to lead the congregation as its pastor.

Stoklosa, who is originally from Buffalo, expected to attend law school when he was planning out his future path as an undergraduate at Colgate, but that all changed when he became involved in University Church and other religious life groups on campus.

“I was a deacon in the University Church. That was a time in my life that I felt I could engage with my faith at a deeper level,” says Stoklosa, who graduated with a degree in religion and history. “That was a formative time for me, and there are great chaplains at Colgate.”

After Colgate, Stoklosa enrolled in Princeton Theological Seminary, where he said the environment reminded him of Colgate’s University Church in that he was surrounded by students from a variety of Christian traditions, learning from people with a range of perspectives.

Now, Stoklosa and his wife are focused on building upon the strong community he has found at Hamilton Baptist Church.

“We’re an older congregation. We are very active and thinking about what God is calling us to do for others.”

That calling to help others includes a community discussion series, a weekly Friday night dinner for Colgate international students, and working with other local churches to help with the Friendship Inn, a free-meal offering held at the Episcopal Church.

“We have this historic connection to both the Village of Hamilton and Colgate,” Stoklosa says. “We really want to be here as a resource for the community.”