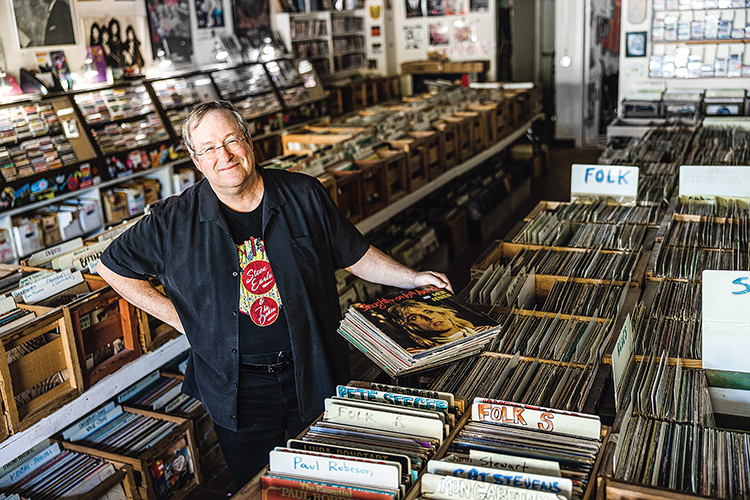 As he wraps up his 28 years as a morning radio host at WXRT-FM in Chicago, Lin Brehmer ’76 slides to the midday shift with the knowledge he outlasted not only most of his peers in the industry but also many radio stations. What has been the secret to his longevity at the popular alternative station long known as “Chicago’s Finest Rock”?

The answer lies as much in Brehmer’s decade-spanning playlists as in his thought-provoking radio essays, titled “Lin’s Bin.” In these weekly reflections set to music, Brehmer waxes philosophical on listener-submitted questions ranging from “What are the most underrated bands in history?” to “What really matters?”

“My boss, Norm Winer, came up with the idea, thinking it was going to be a two-liner response,” Brehmer says. “But it turned into a multimedia extravaganza with music, movie, and television references all encased in a solid four- to five-minute piece. It has been a wonderful creative exercise for me.” In fact, Brehmer meets a lot of listeners, and the first thing they often mention is Lin’s Bin, sometimes remembering hearing it when they were strapped in the backseat. “So this whole generation of children has grown up listening to these radio essays,” he says.

Brehmer got his start in radio at Colgate, filling in at WRCU during a summer semester. “You could play whatever you wanted,” he says. “It was an experience of constant discovery.” At Colgate he also discovered the woman who’d become his wife, Sara Farr ’76.

At his first job, at WQBK-FM in Albany, Brehmer earned his nickname, “The Reverend of Rock and Roll.” “I worked the Sunday morning shift, so it became the running joke that ‘The Reverend’ was coming in,’” he says. A literature major at Colgate, he seized the moniker as an opportunity to use quotes from such classics as John Milton’s Paradise Lost as lead-ins to songs.

In 1984, he joined WXRT as its music director, screening 50 to 60 albums a week for the gems that deserved airtime. He earned multiple accolades for his work from trade publications, including the title “Music Director of the Decade.” “We were instrumental in creating the careers of a number of artists,” Brehmer says. Lyle Lovett, R.E.M., and U2 have all given shout-outs to WXRT during performances in Chicago, thanking the station for its
early support.

He has met music’s A-List over the decades and interviewed his rock ’n’ roll heroes. “What has amazed me is how the biggest artists I’ve ever interviewed — Pete Townsend, Robert Plant, Mick Jagger — have been the easiest interviews I’ve ever done,” he says. “They know how to charm people, and when they’re doing an interview, they realize it is their opportunity to shine.”

It took about six months for Brehmer to shine when he replaced WXRT’s longtime morning show host in 1991. He gradually won over the masses through his shifts on air and countless live appearances, including his annual seven-hour live broadcast on opening day for the Chicago Cubs at Wrigley Field.