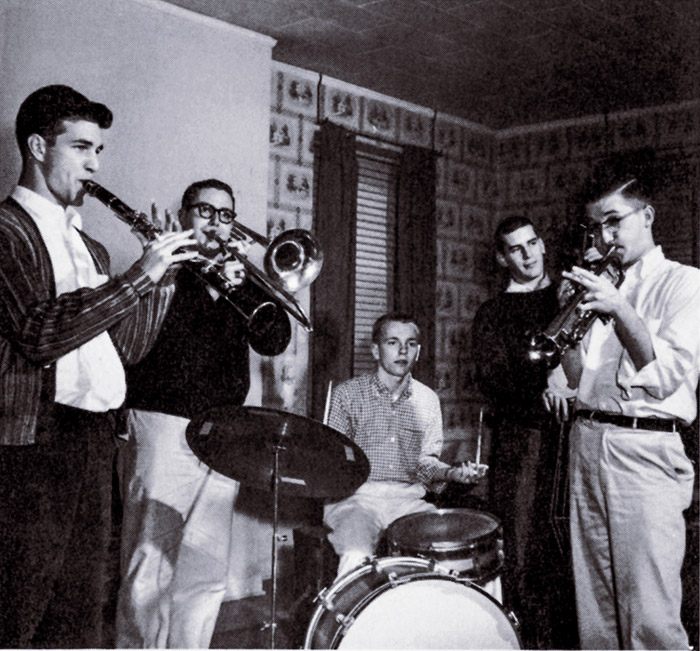 Dexter Morrill (right) and the Hi-Five

The cadence of a tenor saxophone fills the air, undulating soulfully. The smooth timbre of a computer-generated harmony joins the saxophone solo. Together, they form the dreamy jazz piece that has captivated audiences for years.

Written by Dexter Morrill ’60, the composition Getz Variations showcases Morrill’s signature fusion of jazz improvisation and computer-programmed sound. A gifted trumpeter and pioneering composer, Morrill was best known for being among the earliest U.S. college professors to teach “computer music.” As Colgate’s Charles A. Dana Professor of music, he developed a computer music studio on campus in 1972, which was one of the first of its kind in the world. Today, the “studio” is spread out over campus and includes facilities in Dana Arts Center and Case Library. The Digital Music Studio course teaches students how to produce music using digital media.

“For Mr. Morrill and composers like him, the computer has become a primary aid as a composer’s tool,” the New York Times penned in 1982. “These composers are now using computers to create music — certain kinds of tonal densities and unorthodox modulations that would be difficult even to conceptualize, let alone produce, without such a machine.”

Morrill began trumpet lessons at age 8, and by 19 he was studying with Dizzy Gillespie at the first Lenox School of Jazz — a summer program where the world’s greatest musicians taught young protégés.

In 1960, Morrill earned his bachelor’s degree from Colgate, where he led a Dixieland jazz band called the Colgate Hi-Five. He completed his master’s at Stanford University in 1962. After being a Ford Foundation Young Composer Fellow in Missouri, Morrill taught at St. John’s University in New York, which commissioned his Three Lyric Pieces for violin. He earned his doctor of music from Cornell University in 1970.

Joining the Colgate faculty in 1969, Morrill was admired by colleagues for his excellence in inspirational team teaching. Colgate awarded him the Sidney J. and Florence Felten French Teaching Award in 2001. “He is an outstanding talent who has been highly productive. We pay for one man, we get two,” Bill Skelton, the former music department chair, who is now deceased, wrote in the award letter.

As well as serving as a guest researcher at the Institute for Research and Coordination in Acoustics/Music in Paris, France, Morrill received several composition grants from the New York State Arts Council and the National Endowment for the Arts. He worked on a special jazz project for virtuoso trumpeter Wynton Marsalis, and authored A Guide to the Big Band Recordings of Woody Herman and The American String Quartet —  A Guide to the Recordings.

Throughout his career, Morrill composed for ensembles and conventional instruments, and he recorded works with solo artists. His masterpieces have been performed worldwide.

Morrill died at the age of 82. He is survived by his wife of 56 years, Barbara Dodds Morrill; two daughters; two grandchildren; and many nieces and nephews.