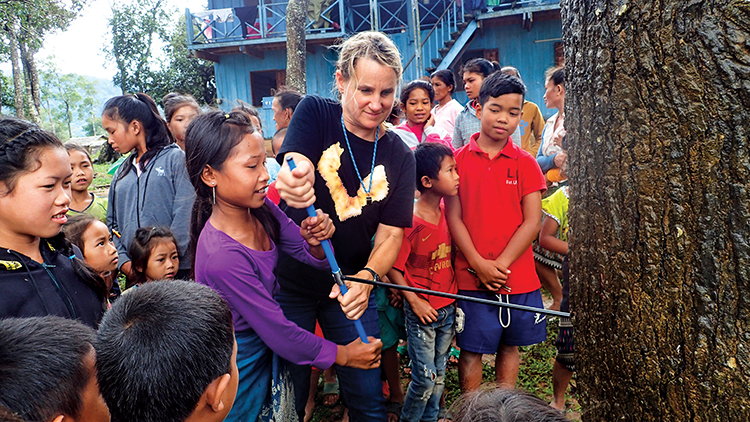 Coffman teaches Laotian children how to use a tree borer to sample Asian swamp cypress.

When Gretchen Coffman ’91 was in Laos 12 years ago, surveying sites to restore wetland habitat for wildlife, she stumbled over the knobby knees of a tree that seemed strangely familiar.

“I took one look up at the enormous tree and its knobby knees and knew it must be related to bald cypress of my childhood,” says Coffman, a restoration ecologist and associate professor at University of San Francisco (USF). She knew all about bald cypress from doing fieldwork in the swamps of her home state of Georgia after college. “I recognized this was a unique tree.”

It was: Coffman had discovered the first wild population of the critically endangered Asian swamp cypress (Glyptostrobus pensilis). Fewer than 200 trees are known to exist elsewhere, in Vietnam and China, all of which are in poor health.

In the years since, Coffman and her research team have discovered eight stands (distinct groupings) of more than 600 individuals of this mighty conifer. It resembles the coastal redwood of Coffman’s adopted home of Northern California — one of its relatives — in both its stature and lifespan. “Some of the trees we found were more than one thousand years old,” she says. “When a tree lives that long, it is often difficult to propagate.”

That was far from the only challenge in restoration of this tree population in Laos. The field site, located along the Ho Chi Minh Trail, had to be cautiously surveyed for unexploded bombs that had been dropped during the Vietnam War. In addition, seeds are found high in the canopy, so they recruited local young men to climb up the trunks to gather them as well as knock seed cones down with slingshots. The team then transported the live seeds on a three-day journey — down the Annamite Mountains, across more than 30 streams, along rivers and unpaved roads — from their high-elevation field site to the capital of Vientiane.

Their efforts paid off. The researchers propagated more than 2,000 seedlings of the cypress. They will start restoration efforts with locals this June by planting 1,500 of the saplings, divided among three sites on the Nakai Plateau, on National Tree Planting Day. “Restoration ecology is a positive focus in the environmental field in which we understand ecosystems through rebuilding them,” says Coffman, who was a biology major at Colgate.

Coffman is in her element out in the elements. Most days, she is in the field with students, helping them hone their plant identification skills and monitoring multiple restoration sites throughout the Bay Area. As adviser for USF’s Ecosystem Restoration Club, she oversees their efforts on the Lone Mountain Native Plant Preserve, an on-campus dune restoration area that her ecology classes research throughout the semester. And the past four summers, she has led students in her Tropical Restoration Ecology class working on community-based restoration with local Malay villages in Borneo.

Her team is now using the ecological data they’ve collected from the tree sites in habitat suitability models to find the best locations for future plantings. They are collaborating with a tree-ring dating specialist to analyze samples from 30 fallen trees for clues to past climate patterns. They are also conducting genetic studies in collaboration with Chinese and Vietnamese scientists.

“The tree is so majestic,” she says. “Our research gives us a great chance to learn the importance of this tree and the ecosystem in which it lives.”