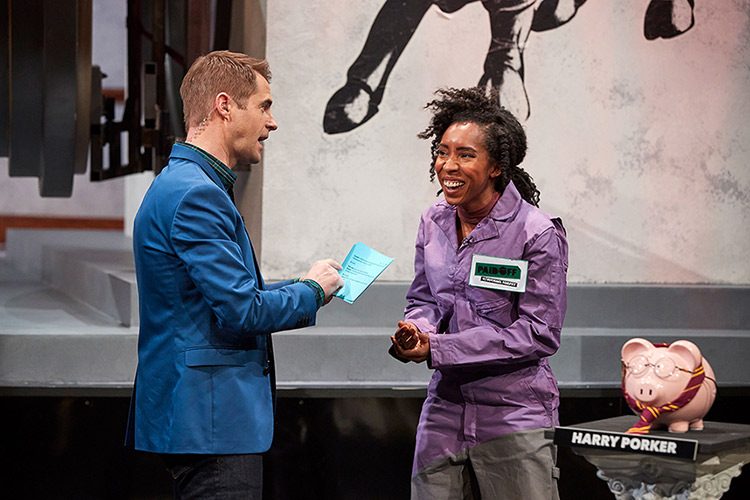 Imagine a world where twentysomethings, with bright, blinding lights shining down on them, anxiously buzz in to answer general trivia questions like “What is the red planet?” Frantically trying to pay off the collective millions they owe, contestants are picked off until a winner emerges. Their future depends on the outcome of the competition.

This isn’t some dystopian novel. “This is America,” Paid Off host Michael Torpey ’02 proclaims on each episode of the TV game show, which started last summer.

Paid Off gathers college graduates from across the nation to compete in a Jeopardy! meets Family Feud–style trivia challenge for a sought-after prize: money toward their student loan debt. Torpey, an actor known for his roles in Orange is the New Black, Sneaky Pete, and Pottersville, is not only the host — he’s also the creator.

Torpey writes many of the questions he asks the contestants, inspired by the classic game shows he loved as a teen. And even though he keeps the air light in Paid Off, he wants viewers to know that student debt is a serious issue.

“It’s an unfair burden that’s being handed out in unfair ways,” Torpey says. “I wanted to make a game show that could highlight the absurdity of the crisis and give away money to people who really need it.”

Americans owe more than $1.5 trillion in student loans, according to the United States Federal Reserve. The average college graduate owes $37,172 — more than the price of a wedding, a Tesla Model 3, or business start-up costs, compares CNBC. That’s about the amount Torpey was paid to be in a Hanes underwear commercial.

He used those funds to pay off the $40,000 of his wife’s college debt. When they mailed the check, she cried.

“I felt embarrassed that only then did I realize it’s not just a financial matter,” he says. “Debt is an invisible burden that hangs over you and affects every decision you make. There is a serious psychological cost to it.”

Torpey knows that the average Joe isn’t booking underwear commercials left and right, so he created the show to publicly question how the average person should be expected to pay off high-cost loans.

“I am so thrilled/horrified that the national embarrassment [causing] the need for this ridiculous game show will continue for another sixteen episodes,” Torpey says of Paid Off’s renewal. “I truly hope the show won’t have to exist for long, but until real reform comes to higher education, I will continue to highlight the stories of the forty-five million Americans affected and give away as much money as possible to as many people as possible.”

Although Torpey says the show does its best to stay nonpartisan, he believes the government is not doing enough to protect student borrowers. Not-so-subtle jabs are sprinkled throughout Paid Off. For example, when contestants are kicked off, they’re guided to a telephone where Torpey encourages a call to their congressperson. And at the end of each show, he even asks viewers to help foster change. “Call your representatives right now, and tell them you need a better solution than this game show,” he declares.

“The game show exists in a weird world of satire that’s pretty on the nose,” Torpey says. “People have said that the show is dystopian. I think it’s holding up a mirror to the current state of higher education, and if you think that’s dystopian, I agree with you. It’s not a good situation.”