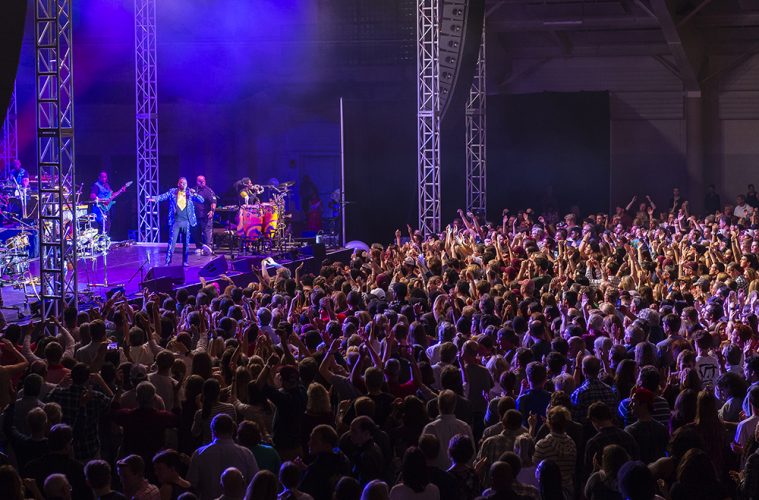 For years, Colgate has hosted events ranging from the Dalai Lama to Aretha Franklin in the Charles H. Sanford Field House. The athletics facility (used by the track and field team, among others) provides ample room for attendees, impressive staging — and an undeniable echo. The facility’s surfaces, designed for athletics purposes, did not lend themselves to proper acoustics for events. Enter Colgate’s Engineering Club.

In the spring of 2017, University President Brian W. Casey approached the physics department with the field house’s dilemma. Kiko Galvez, Charles A. Dana Professor of physics and astronomy, took the issue to the Engineering Club and asked them to analyze the space and propose a solution.

With Galvez as their adviser, club officers began brainstorming. Members were tasked with researching the physics behind acoustics and identifying needed equipment, appropriate soundproofing materials, and which computer programs would help them to understand their results.

“We used a speaker that projected a sharp sound and then used several microphones around the gym,” Bertone explains. “We rotated them ninety degrees each time we recorded something different.”

Once the data were acquired, club members used Matlab, a numerical computing programming language, to understand the results. They found that the field house had a reverberation rate of 3.3 seconds; generally, a reverberation time of 1.9 seconds is considered appropriate to provide clarity in an event space. They took this evidence, as well as the recommendation to reach out to a consulting firm to improve the acoustics, and presented it to Casey, a board of deans, ITS staff members, and facilities department representatives.

The consulting company that was hired utilized the club’s analysis, and 540 Eckel Eckoustic Functional Panels were placed on the ceiling and sides of the field house in time for 2018’s commencement ceremony, noticeably improving the sound quality of the room for years to come.

Between the hours of collective research, days spent collecting samples, and group effort in preparing presentations, the project spanned the entire spring semester.

For Bertone, the time commitment paid off. “We were able to apply a lot of the stuff we have learned in the classroom to this, which was really fascinating,” Bertone says. “This is my favorite Engineering Club project that we’ve done.”